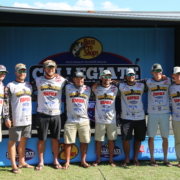 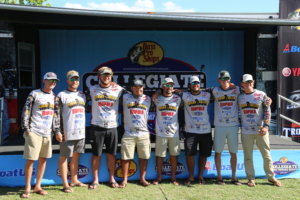 presented by Abu Garcia. The anglers from Michigan entered the week ranked third, and while they did gain 230 points on the leaders, still remained in third when the final points were totaled last Thursday.  Adrian College’s two best teams at the Championship earned a total of 2,700 points to push their mark for the year up to 13,385.

“Finishing 3rd overall in School of the Year means the world to my team and I,” said team member Griffin Fernandes.  “We work relentlessly, both on and off the water, to make sure we put ourselves in the best position to compete, so to finish 3rd overall against so many great teams across the country really makes us proud to show our work ethic is paying off.”

Adrian College’s top two teams at the BoatUS Collegiate Bass Fishing Championship presented by Bass Pro Shops on Pickwick Lake finished 6th & 11th overall.  Of all the schools competing at the year-end Championship, Adrian’s 2,700 points were the second-most total points earned by any one school at the event.

The 2019-2020 season was another successful year for the anglers from Adrian College.  They led the School of the Year race for roughly half of the season and had a team member win the 2019 Bass Pro Shops Big Bass Bash presented by Berkley on Kentucky Lake.  Consistency is the goal of any team striving to be the number one team in the nation.  This begins by building a solid foundation of anglers that work together to better the team, something that Adrian college has mastered through the years. 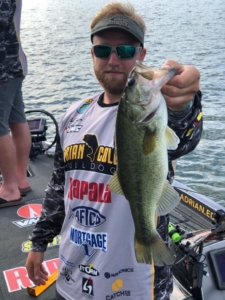 “The chemistry on the AC Bass Team is unreal. We’re like a giant family. We all have each other’s back and would do anything for one another. No matter the circumstances we always have fun and grind to do the best we can at every tournament,” noted Adrian College angler Jarrod Layton.  “Every single person on the team will be at my wedding someday and I can almost guarantee the same for each one of theirs. I couldn’t ask for a better group of guys to travel the country with.”

At the end of each season, when we have the opportunity to talk with the top finishing teams in the Bass Pro Shops School of the Year presented by Abu Garcia, both the anglers and coaches of each respective team don’t want their dream season to end.  These anglers spend months on end together traveling the country and build bonds that last a lifetime, as well as create a winning culture that results in their school being one of the best in the nation.

“Our team chemistry is arguably the best aspect about this team. Besides being teammates, we are all super close friends, and spend almost every day hanging out on and off-campus,” noted Fernandes.  “We all trust each other and it makes it very easy to work together with everyone to help dial in everyone’s bite, and overall it’s helped our success ten-fold. My favorite part about this team is how similar we all are, and how close I’ve been able to get with all of these guys. They’re some of my best friends and incredible fishermen, and to be able to fish alongside them for Adrian College is nothing short of a blessing!”