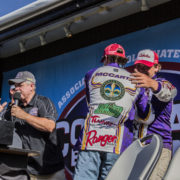 2017 Championship Roundup with UNA continues this week. Straight off of their Championship win, the University of North Alabama’s Sloan Pennington & Hunter McCarty took a moment to talk to us about both days on the water and what it was like to win!

Pulling out the huge win was the home town team of Sloan Pennington and Hunter McCarty who had back to back awesome days bringing in 21.02 pounds on day two, giving them a two day combined weight of 44.33 pounds. These two anglers on day one said they were the underdogs of the team and were not as good on Pickwick Lake as some of their teammates were. These two anglers were more of “junk” fishing just going out and fishing to their strengths and having fun. Both of the anglers actually said they enrolled at UNA to learn to be better ledge fisherman.

“Today was super stressful, we went to our first spot and didn’t catch a fish. At 12:30pm our bite turned on and we culled up the rest of the day to get our limit, we were thinking we only had 17-18 pounds. We had never fished the winning spot before, we actually found it in practice. We are super excited to win this event, we never, never expected to win this event. It still hasn’t set it. Going to be awesome to bring the trophy back to UNA,” said Sloan Pennington and Hunter McCarty.

Catch more of what the Champions had to say in this never before seen interview.

The Cabela’s Collegiate Bass Fishing Series is the largest collegiate bass fishing series in the nation. The series is operated by the Association of Collegiate Anglers, which is an organization designed to provide long-term sustained growth within collegiate angling through assistance with forming institutionally recognized clubs, serving as a sanctioning body and resource for clubs, and providing a unified voice for collegiate anglers. The Association of Collegiate Anglers also provides benefits for school clubs including liability insurance, discount purchase programs, no entry fee tournament opportunities, media exposure, and much more!

Gill Technical Fishing Gear Has You Covered
Scroll to top