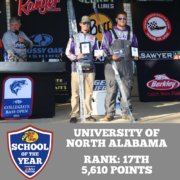 SAN ANTONIO, TX (4/30/2020) – The chase for Bass Pro Shops School of the Year presented by Abu Garcia is one of the most coveted titles in collegiate bass fishing.  Hundreds of teams from across the country compete all year long to see where they stack up against the top schools in the nation.  Now in its eighth year, the School of the Year race has only had one back-to-back winner.  The University of North Alabama won the title in consecutive years, being crowned college fishing’s best team in 2014 & 2015.

During the 2019-2020 season, UNA has accumulated a total of 5,610 points.  Entering the final event of the season, they are sitting in 17th place.  The team acknowledges that this may be a down year for them, but they are also proud to be inside of the Top 25.  “Being in the Top 25 is definitely something to be proud of,” said Justin Lane, UNA senior.  “It’s not necessarily the standard we hold ourselves to at UNA, but we are thankful for the success we have had this year.  We hope we can finish this unusual season strongly though, and make a good jump in the standings.”

Lane, and fellow teammate Luke Mason, helped contribute to UNA’s success this season.  The pair finished in second place at the 2019 AFTCO Collegiate Bass Open on Lake Dardanelle with a two-day total of 23.60 pounds.

UNA is also looking forward to the BoatUS Collegiate Bass Fishing Championship presented by Bass Pro Shops on Pickwick Lake.  The event was recently rescheduled for June 10-11, 2020, and takes place in Florence, AL…the home of the University of North Alabama.  “ The Championship is a tournament we always look forward to for several reasons.  Most importantly, it’s the National Championship.  It’s in our backyard, on our home lake, which gives our town the opportunity to come out and support us,” Lane explained.

Back in 2017, UNA and the town of Florence got to celebrate a National Championship in their backyard.  Sloan Pennington and Hunter McCarty won the BoatUS Collegiate Bass Fishing Championship, claiming UNA’s first-ever win at this event.  The energy at McFarland Park on that final day was electric.  Entering the 2020 installment of this great tournament, UNA hopes to re-capture the title and represent for their hometown.

“We also have had a lot of success in this tournament in the past, and we would love to have another Championship trophy on campus.  Not only is Pickwick an amazing fishery, it’s our home turf and we’re excited to get out there and compete,” Lane concluded.