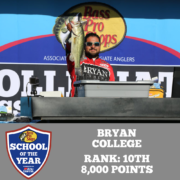 SAN ANTONIO, TX (5/11/2020) – This week kicks off another round of feature articles as we continue to highlight the Top 25 teams in the Bass Pro Shops School of the Year presented by Abu Garcia.  We will be focusing on the teams that are currently ranked 6th-10th.  Today’s featured team is 10th ranked Bryan College.

Bryan College cemented their place in college fishing during the 2016-2017 season.  The Lions from Dayton, TN won the 2017 Bass Pro Shops School of the Year presented by Abu Garcia in commanding fashion.  An achievement that was several years in the making, Coach Keen and a group of well-accomplished anglers took the most coveted title in college fishing.

Just a youngster at the time, Cole Sands was one of the key contributors to that title run.  Fast forward to now and Sands is widely considered one of the top college anglers in the game.  At the 2018 BoatUS Collegiate Bass Fishing Championship presented by Bass Pro Shops, Cole Sands & Nathan Bell fished their way to a 2nd place finish out on Pickwick Lake.  Following a brief hiatus due to shutdowns concerning COVID-19, Sands is ready to get back at it again.  “I’m looking forward to it, just being able to fish college tournaments again.  We’ve had to miss a lot of tournaments due to the virus and this Championship on Pickwick is a great venue to kick things back off,” Sands explained.  “This is always one of the funnest events of the season and there isn’t a better lake to be at than Pickwick this time of year.”

The 2020 BoatUs Collegiate Bass Fishing Championship presented by Bass Pro Shops is scheduled to take place in exactly one month on Pickwick Lake in Florence, AL.  Following two days of competition, a winner will also be named in the Bass Pro Shops School of the Year presented by Abu Garcia.  To find out more about the upcoming event, click here.