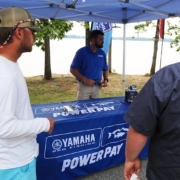 “The expansion of Yamaha Power Pay is a testament to the growth of competitive fishing. Anglers choose Yamaha for the best power and unmatched reliability, and this program rewards their loyalty and passion,” said Connor Megan, Senior Regional Marketing Specialist, Yamaha Marine Engine Systems. “We look forward to adding more anglers to the program, and we wish all competing anglers the best of luck during the 2022 season.”

Competitors don’t have to win a tournament to receive a Power Pay payout. The program rewards the highest placing angler in each sanctioned tournament running Yamaha power.

Amateurs, pros and even families can register for Power Pay. The Engebretsons, a family of anglers from Wausau, Wisconsin, used the program to turn their weekend hobby into extra cash and lifelong memories together.

“We all enjoy fishing, and both my son and daughter have now begun competing in bass and walleye tournaments,” said Guy Engebretson after his family won their third Power Pay event last year. “When we learned about Power Pay, registering was a no-brainer for us. We own Yamaha outboards, and we compete in tournaments using those outboards. Why not use the product we know and trust to earn a little extra during the tournaments? It was a simple decision that paid off quickly.”

Since launching Power Pay in October 2019, Yamaha Marine has awarded more than $382,000 to anglers competing in saltwater and freshwater tournaments across the country. For a complete list of sanctioned tournaments and other Power Pay information including official rules, terms and conditions, visit www.yamahapowerpay.com.