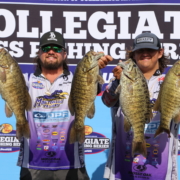 Six Bags Over 20 Pounds Cross the Scales on Day One as Tanner & Climer from Tarleton St. are in 2nd with 23.38 lbs and Smith & Schrimsher from Calhoun CC are in 3rd with 23.05 lbs

FLORENCE, AL (4/10/2021) – Day one of the 2021 Pickwick Slam is in the books as the top collegiate anglers from across the nation compete on famed Pickwick Lake for $20,000+ in prizes and contingencies.  Schools and teams are also vying to earn double points towards the Bass Pro Shops School of the Year presented by Abu Garcia, as this is the final double points event prior to the year end Championship.  A total of six limits over 20 pounds crossed the scales, with James Willoughby and Chance Schwartz from number one ranked University of Montevallo weighing in 24.96 pounds to take the day one lead.

Here are the Top 5 teams following day one of competition at the Pickwick Slam:

The University of Montevallo enters this week leading the Bass Pro Shops School of the Year presented by Abu Garcia by approximately 1,000 points over second ranked McKendree University.  Montevallo, from right here in the state of Alabama, got things off to a good start today as James Willoughby and Chance Schwartz weighed in 24.96 pounds to claim first place.

View a complete on the water report from the two anglers here.

Sitting in the top three after day one of competition on Pickwick Lake during an ACA ran event is a familiar spot for Willoughby and Schwartz.  Following day one of the 2020 BoatUS Collegiate Bass Fishing Championship presented by Bass Pro Shops, the duo from Montevallo was in the top three.  That final day of competition did not pan out as they had planned, and the two angler team slipped down the standings.  Tomorrow they will be battling to avenge their past lapse, and seize the moment to win a major collegiate tournament.

Kayden Tanner and Samuel Climer from 12th ranked Tarleton State University weighed in  23.38 pounds to claim second place in the near 200 boat field.  The team from Texas weighed in a limit of five smallmouth bass with the largest one weighing over six and a half pounds.  That was the largest smallmouth weighed in on day one of competition.

Rounding out the top three are Landon Smith and Jacob Schrimsher from Calhoun Community College.  The duo weighed in 23.05 pounds to be just under two pounds behind the leaders entering the final day.  This will be a team to keep an eye on as the event plays out tomorrow. Smith has a strong history of high finishes on Pickwick Lake in ACA events, and the two will be looking to bring home the win at the end of weigh-in tomorrow.

Day two coverage of the Pickwick Slam will begin tomorrow morning from McFarland Park with the official boat launch.  Weigh-in coverage will start at approximately 1:30 PM as the first flight is due back in.  Be sure to follow along on social media, the website, and Outdoor Action TV for complete coverage.