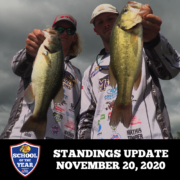 Adrian College Drops to 2nd, and Defending Title Holders McKendree University Inch into 3rd in the Latest Update to the Bass Pro Shops School of the Year presented by Abu Garcia

SAN ANTONIO, TX (November 20, 2020) – For the second update in a row, a new team sits atop the standings in the chase for Bass Pro Shops School of the Year presented by Abu Garcia.  Last season’s runner-up, the University of Montevallo, earned 130 points over the course of the past two weeks to distinguish themselves as the number one bass fishing team in the nation with 7,810 points.  Montevallo leapfrogged previous number one Adrian College who now sits in 2nd, and the 2019-2020 School of the Year winner McKendree University eases up one spot to round out the top three. 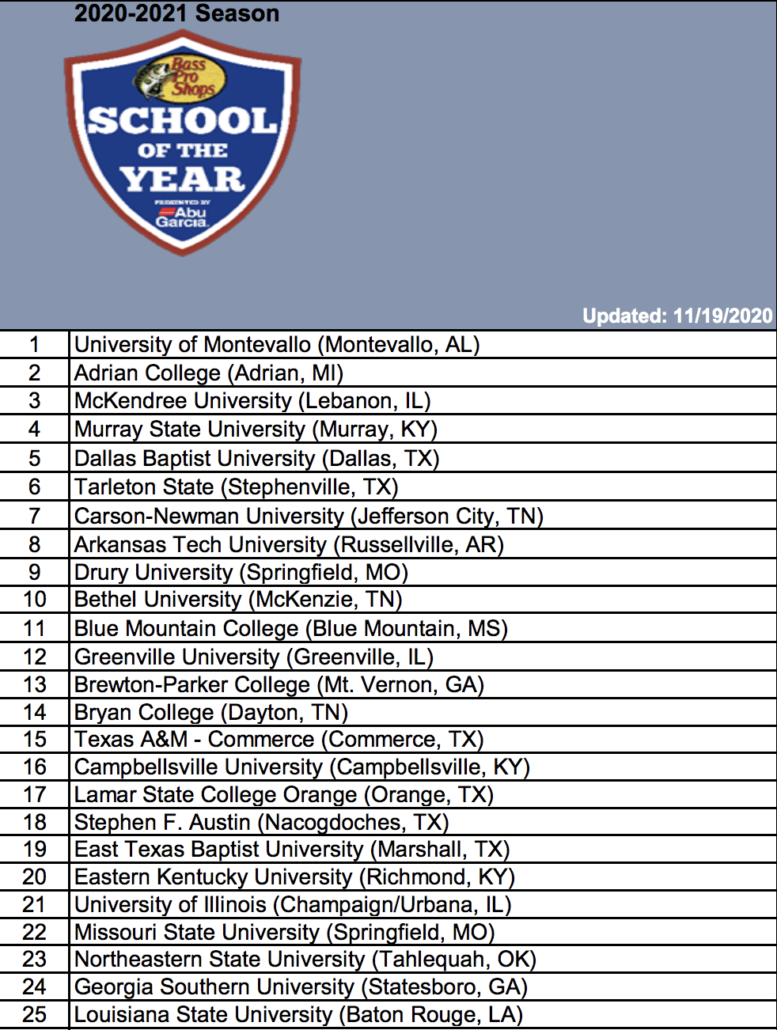 This marks the first time in the history of the University of Montevallo fishing team in which they have been ranked the number one team in the nation.  Coming off of a runner-up finish last season, the team from southern Alabama entered 2020 with a chip on its shoulder.  A strong finish at the Southern Collegiate on Wheeler Lake, combined with 50 hosting points, proved to be the bump they needed to cement their place at the top of the sport.  Those 130 points puts Montevallo clear of second-ranked Adrian College by just 30 points.

Here is a quick look at several other teams that made significant moves inside of the Top 10 in this update to the Bass Pro Shops School of the Year presented by Abu Garcia:

Half of the teams in the new Top 10 saw an improvement in their ranking since the last update.  This is the most fluctuation we have seen near the top since the beginning of the season.  Drury University is the newest team to the Top 10 in this update.  Both Arkansas Tech and Dallas Baptist are in uncharted territory for their respective schools, as neither team has been ranked this high over the course of the past few seasons.

The other half of the Top 25 saw the standings tighten as well as numerous Texas-based schools earned significant points at the FLW Regional on Sam Rayburn last weekend.

The newest team to crack the Top 25 is Louisiana State University.  Located in Baton Rouge, LA, LSU moved up from six spots from 31st to stake claim to 25th.