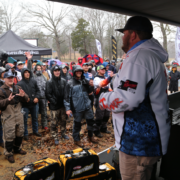 The differences between fishing a standard five bass limit tournament and a big bass format event are fairly drastic.  In one, you are trying to get bites with consistency, stay in productive areas, and work your way up to the best bag of fish you can catch.  On the other hand, in a big bass event, the goal is to catch just one big fish, and for that fish to be the biggest one in the whole event.  But when you’re catching good numbers of quality fish regularly throughout the day, the differences between the two events cease to exist.  This was the case for the Blue Mountain College Team of Ty Cox and Alden Keel.  On day one of the 2018 Cabela’s Collegiate Big Bass Bash – presented by Berkley, these two anglers reported catching fish that weighed eight plus, seven, and several around three to four pounds.  The 8.94 pound largemouth caught by Ty Cox was good enough to win day 1 session 3 presented by Cabela’s, and to place 2nd overall in the event. 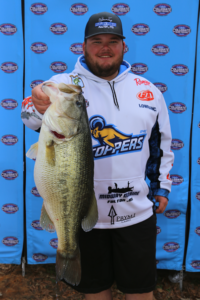 “It was a great week.  Caught a bunch of big fish.”  This quote from Cox may even be a bit of an understatement.  Along with his fishing partner Alden Keel, this group of Blue Mountain College anglers had a phenomenal day one.  By the estimation of the camera boat driver following these two anglers around the lake, “If they were fishing a five bass tournament, they could easily have had 30 plus pounds.”

This is not the first time Ty Cox has done well in this event.  Two years ago, fishing for Itawamba Community College, he won the Big Bass Bash with a fish weighing in at over eight pounds.  Having past knowledge and history on this lake helped Cox figure the fish out this week, “How I caught the fish two years ago, I was fishing the exact same pattern but I was throwing a lipless crankbait.”  This year, the duo was fishing crankbaits in about 10 feet of water to get their bites.

“It was just one of those magical spots where they stage up going into this pocket to spawn.  Bites were slim.  One bite every hour.”  Going into detail about the area they were targeting, Ty Cox shed some light on the pattern that produced for them on Kentucky Lake.  As we all know by now, the lake had risen a great deal leading up to this event.  Many of the fish moved up with the rising water and positioned in flooded bushes way up shallow where anglers could not get to them.  As the water dropped during the event, the fish began to pull back out onto the first bit of structure they could find.

The team from Blue Mountain College found a point that sat just outside of an area with a good bit of flooded brush.  Working medium diving crankbaits back 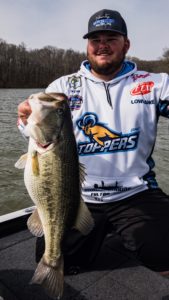 to the boat, they began to load up with fish.  Wind was key for this bite.  Ty said that if the wind was not blowing, then they did not get any bites.  The fish in this area were keying on shad.  If the wind did not blow, the baitfish did not get blown into this area.  This is why a slightly larger crankbait was key to getting big bites when the wind kicked up.

Touching on it briefly earlier, Ty Cox has fished in other Cabela’s Collegiate Bass Fishing Series events before.  Doing so with Itawamba Community College, he is no stranger to success.  Now, Cox is a member of the Blue Mountain College fishing team from Blue Mountain, Mississippi.  Located in the northeast part of the state, just an hour outside of Oxford, this is the team’s first year competing in collegiate fishing events.  Ty Cox understands the significance of their performance this weekend, “This is our first year as a program, having a fishing team…Just pretty excited to do good in our second tournament.  It feels good, especially from our school.”

Entering the weekend with no points in the Cabela’s School of the Year – presented by Abu Garcia, Blue Mountain College will make a significant jump following this weekend.  The team weighed in multiple times over the span of two days, but only their two biggest fish will count towards school of the year.  Alden Keel finished 7th overall with a 7.21 pound largemouth.  This will count as one of their fish earning double points.  The other fish is that of Ty Cox that crossed the stage on day 1.  The 8.94 pound fish wound up 2nd place overall, less than half of a pound out of 1st place. 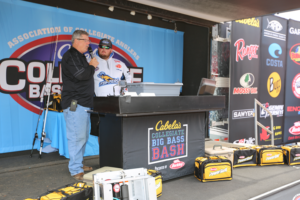 The giant bass caught by Cox earned him a haul of prizes.  First are the honors of winning day 1 session 3 presented by Cabela’s.  For this Ty received a $1,000 Cabela’s gift card.  Next, Ty received over $3,000 in prizes through various contingency programs.  He received a $250 ACA contingency, $500 for being the highest finishing Ranger Cup participant, and a Top 3 gear package valued at $2,500 as part of the Team Cabela’s contingency.  This package from Cabela’s provides Ty with a set of Guidewear, one PFD, one rod, and an opportunity to interview to become part of the Team Cabela’s Field Staff.  For a full list of contingency programs offered to college anglers click here.

To succeed as a tournament angler, it takes a healthy combination of luck and skill.  You can’t control the fish.  The battle is between you and them.  For the angler, the goal is to put yourself in the right areas and provide yourself with the best chance of getting bites.  This is exactly what Ty Cox and his partner Alden Keel did during the two day event at Kentucky Lake.  Although practice was tough, the two anglers went to work trying to put together a pattern that would be successful for the span of the event.  Though neither angler took home the overall grand prize, they succeeded in finding the right caliber of fish to take a shot at winning the tournament. 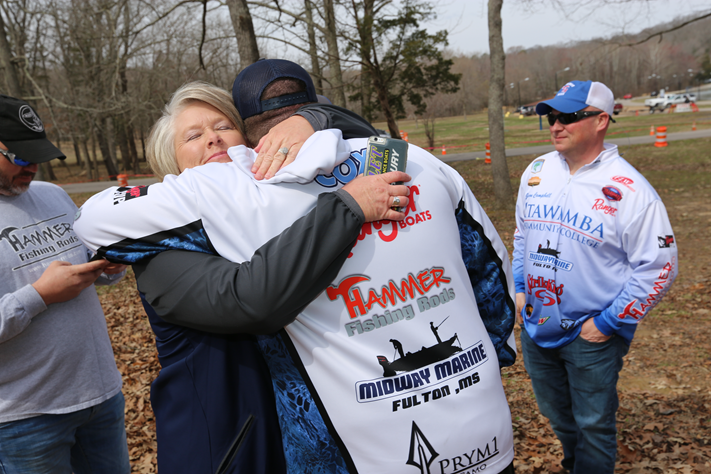