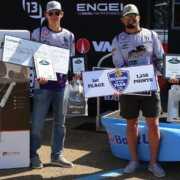 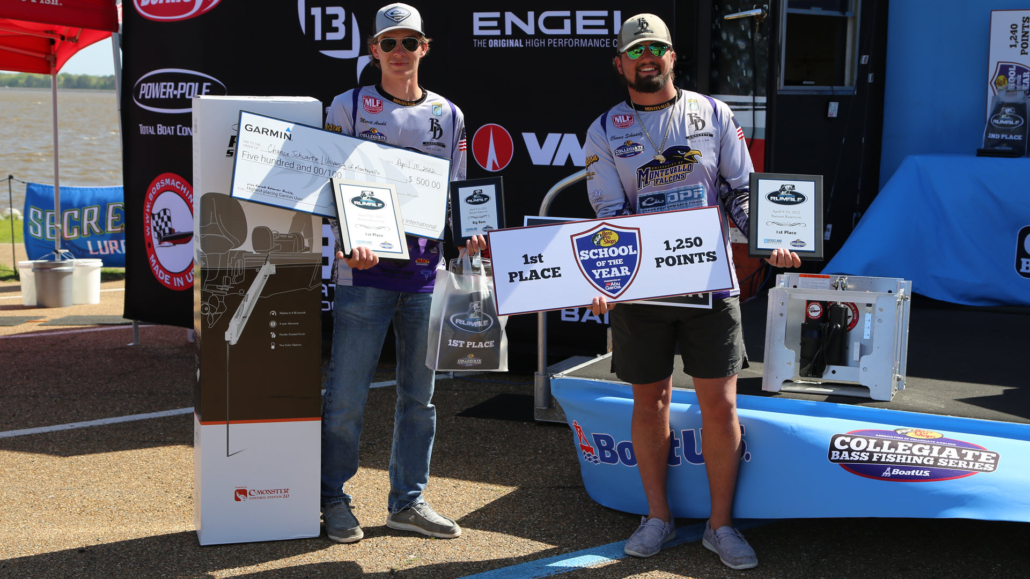 RIDGELAND, MS (April 10, 2022) – Tournament competition has concluded and all the prizes have been awarded to the Top 20 finishers at the 2022 Barnett Reservoir Rumble.  Hundreds of the nation’s top collegiate bass fishing anglers competed for two days on a windy Barnett Reservoir in Ridgeland, Mississippi, at this nationally televised event, in an effort to claim their share of more than $20,000 in prizes and contingencies.  Day one saw a packed leaderboard with several of the top-ranked schools in the nation in the Top 10 – which ensured a shootout was in store for the final day with cameras rolling to catch the action.

As day two unfolded the wind became a key part of the day, making it hard for teams to run around the famed reservoir in Mississippi.  However, the winds didn’t stop the number one ranked University of Montevallo pairing of Merritt Arnold and Chance Schwartz from taking home the win with a two-day total of 30.15 pounds.  Coming in 2nd were fellow University of Montevallo teammates Adam Carroll and Trey Dickert, and rounding out the top three was the Adrian College duo of Matthew Davis and Dalton Mollenkopf.

Day two of tournament competition saw plenty more quality bags weighed in at Madison Landing.  The overall winners of the event, Arnold and Schwartz from Montevallo, weighed in a five-bass limit of 15.78 pounds.  They also take home big bass honors with a largemouth bass weighing 6.62 pounds, caught during Day 2 of tournament action.  Along with the valuable prizes that come with finishing in 1st place and Overall Big Bass, Arnold and Schwartz also claimed the Garmin Tournament Rewards and ACA Logo Contingency bonuses for an additional $1,000.  More in-depth coverage of the event will be coming next week as well as in the upcoming television episodes covering the event.

Along with the valuable prizes and contingencies awarded today, teams will earn points for their highest two finishing teams inside of the Top 125.  Montevallo finishes the event with teams in 1st and 2nd overall.  Those two top finishes combine for a total of 2,490 points to be added to Montevallo’s current season total.  By earning close to 2,500 points at this weekend’s event, Montevallo will likely widen the gap between themselves and the second-ranked team.

Taking a closer look at the Top 20 teams in the Barnett Reservoir Rumble, all 20 teams represent schools currently ranked in the Top 25 in the nation.  Points standings will be updated later this week for the Bass Pro Shops School of the Year presented by Abu Garcia.  Check back to collegiatebasschampionship.com for standings updates and a comprehensive breakdown.