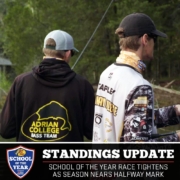 SAN ANTONIO, TX (November 11, 2021) – The chase for the 2021-22 Bass Pro Shops School of the Year presented by Abu Garcia began on June 1, 2021 and is nearing the halfway mark with the holiday break and a new year fast approaching.  As the season has progressed, the points standings in the School of the Year race has continued to tighten as more teams fish more events.  The top six teams are now separated by no more than 1,200 points, as Adrian College leads with a season total of 7,340 points.  2nd ranked McKendree University looms closely behind Adrian, trailing by 215 points, and 3rd ranked Auburn University is 435 points out of that top spot.

Here is a look at the current Top 25 in the Bass Pro Shops School of the Year presented by Abu Garcia: 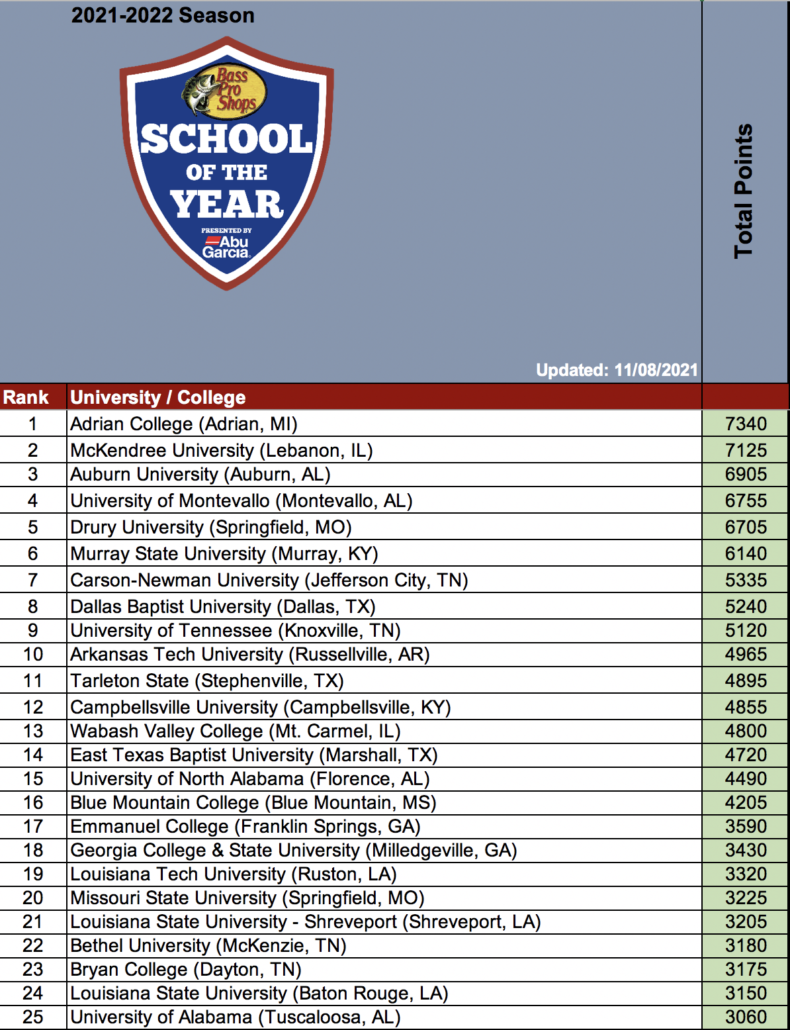 To this point in the season, Adrian College has put together a dominant performance.  Propelled by a National Championship victory, another major tournament win as well as multiple Top 10 finishes, Adrian College has earned 7,340 points so far on the season.  The team from Michigan staked claimed to the School of the Year lead at the first update and has held onto that top spot ever since.  This has been a common trend for Adrian College over the past few seasons, to start the season with a commanding lead, and this year they hope to keep up the pace and win this prestigious title.

The storyline behind Adrian College’s six-month reign atop the standings is continuing to be written as the season progresses.  Over the course of the past three months, Adrian’s lead has continued to dwindle as the rest of the field draws closer to that top spot.  Here is a look at the points margin between Adrian College and the 2nd ranked team since August:

Not only is the margin between 1st and 2nd narrowing, but the rest of the Top 10 are also closer to Adrian College than they have been all season, thanks in part to other events in various parts of the country.  The top six ranked teams are separated by 1,200 points or less at the moment.  Amongst that group of teams are 2) McKendree University, 3) Auburn University, 4) University of Montevallo, 5) Drury University, 6) Murray State University.  McKendree and Montevallo combined have won three School of the Year titles, and the other three teams behind Adrian College are all seeking their first-ever title.  Each of these teams are determined, seasoned, and hungry to take home the most prestigious title in collegiate bass fishing at season’s end.

Follow this link to view a complete schedule of School of the Year points earning events.