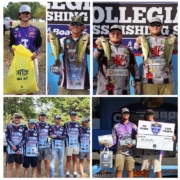 SAN ANTONIO, TX (January 5, 2022) – In today’s feature, we will be highlighting teams ranked 11th – 15th in the Bass Pro Shops School of the Year presented by Abu Garcia. 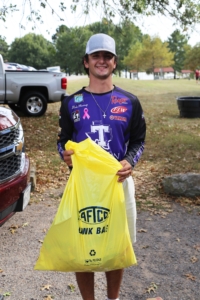 For the second time in this mid-season rankings review, the pre-season poll correctly projected a team’s current ranking.  Tarleton State University entered the season projected 11th overall, and as we reach the halfway mark of the 2021-22 Bass Pro Shops School of the Year presented by Abu Garcia…Tarleton is ranked 11th.  The Tarleton State University team, from Stephenville, TX, is one of the oldest fishing programs in the nation. So far this season, they’ve earned 4,895 points which has them sitting just 70 points outside of the Top 10.

Coming off of a Top 10 finish in 2021, Tarleton State entered the 2021-22 season with a great deal of confidence.  “We are all very proud that we are expected to finish in the Top 15 in SOY,” said Reagan Nelson, Tarleton State University angler.  “We finished 10th overall last year and we want to build on that and get another Top 10. With the group of anglers we have right now, that is very possible.”

Tarleton State is quickly proving that they are indeed a force to be reckoned with this season.  The team has notched two Top 10 finishes at MLF Regional events, earned 975 points at the Bassmaster College Series Championship, and capitalized on double points at the AFTCO Open to the tune of 1,300 points.

While they’re currently knocking on the door of cracking the Top 10, there is a strong possibility that Tarleton State can finish the season ranked in the Top 5 of the Bass Pro Shops School of the Year presented by Abu Garcia.  Three more double points events are on the horizon, two of which are at fisheries that Tarleton State is very familiar with (Kentucky Lake, Pickwick Lake).  Sitting just over 2,000 points out of that 5th place ranking, Tarleton State has a realistic shot at one of the best seasons in team history if they can put together some quality finishes at those double points events.

The next team to be highlighted in the mid-season rankings review is Campbellsville University.  Coming off of an 11th place finish in 2021, Campbellsville entered this season 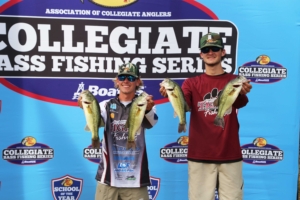 projected to finish 13th in the Bass Pro Shops School of the Year presented by Abu Garcia.  With a season total of 4,855 points, Campbellsville is currently ranked 12th.

Taking a closer look at Campbellsville’s season to this point, the team has not earned less than 700 points at any one event.  This is quite the model of consistency from a young team that is looking to replace multiple veteran anglers that recently graduated.  This performance is a testament to the fishing program being built at Campbellsville University.

Campbellsville University showed up at Lake Dardanelle in Russellville, AR for the AFTCO Collegiate Bass Open with several new faces competing.  That group of freshmen, combined with the work of other existing team members, managed to accumulate a total of 1,720 points that weekend.  Wyatt Pearman & Evan Thomas were the highest finishing team for Campbellsville at the AFTCO Open as they finished in 26th, earning an even 1,000 points.

Campbellsville has a strong team with the skillset, resources, and support to go out and have a massive spring season.  Like the previously mentioned Tarleton State, Campbellsville has a very realistic shot at ending the year in the Top 5.  Capitalizing on double points opportunities at Kentucky Lake and Pickwick could go a long way in determining Campbellsville’s fate come season’s end. 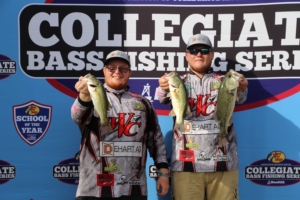 Wabash Valley College checks in at 13th in the Bass Pro Shops School of the Year presented by Abu Garcia.  Following a 20th place finish in 2021, WVC entered the 2021-22 campaign with a pre-season ranking of 16th.  With a season points total of 4,835, WVC is working towards one of the best finishes in the school’s brief history.

Wabash Valley College is continuing to build on the momentum they created during their first full year as a competitive bass fishing team.  Currently ranked 13th in the Bass Pro Shops School of the Year presented by Abu Garcia, WVC is climbing up the rankings once again.  A mixture of second year anglers and freshmen are combining to provide a boost to this growing program.

So far this season, WVC appears to be making great on the fly decisions.  When you find yourself ranked amongst the Top 15 bass fishing teams in the nation, you’re doing something right.  Watch for this new and up and coming fishing program to steadily rise in the standings as we build up to the crowning moment at Pickwick Lake this upcoming May. 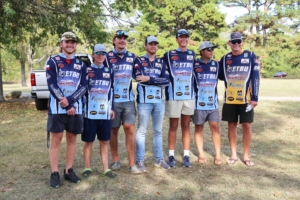 Of the five teams we are highlighting in this particular feature, East Texas Baptist University is the one that has most exceeded its pre-season ranking.  Picked to finish 23rd overall at the start of the year, ETBU is now ranked 14th in the Bass Pro Shops school of the Year presented by Abu Garcia.  Coming off of a 34th overall finish in 2021, ETBU has earned a total of 4,720 points this season.

A quick glance at ETBU’s season to this point reveals two key events to the team’s success.  3,230 of the Texas school’s 4,720 points have been earned at just two events, the MLF Southern Regional at Lake O’ the Pines and the 2021 AFTCO Collegiate Bass Open.

Cannon Bird & Jacob Keith finished in 9th place back in June at the first MLF Southern Regional event of the season, weighing in a five bass limit for 21 pounds 14 ounces that earned ETBU a total of 920 points.

The team’s largest chunk of points accumulated came at the AFTCO Collegiate Bass Open in October.  At the first ACA double points event of the season, ETBU earned a total of 2,310 points thanks to two Top 20 finishes.  Jacob Keith & Brett Jolley (5th) and Kaden Proffitt & Corey Morris (16th) were the key contributors for ETBU at the AFTCO Open.

East Texas Baptist University has a very established team with a deep roster of talented anglers.  As the team is setting up to have one of the best finishes for the program in recent years, keep an eye on the ETBU crew moving forward.

Rounding out this five team highlight of schools ranked 11th – 15th is the University of North Alabama, a two-time winner of the Bass Pro Shops School of the Year presented by Abu 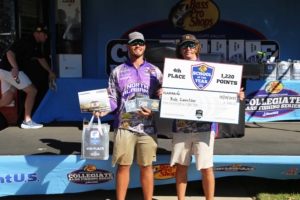 Entering the 2021-22 season, UNA had its sights set on bringing the program back to national prominence with a formidable showing this year.  “We plan on moving into the Top 5 and also keeping the National Championship trophy right here in Florence, AL,” said Benson Dowler, UNA Team President.

Winning the BoatUS Collegiate Bass Fishing Championship presented by Bass Pro Shops is a feat that has only been achieved by a team from UNA just once.  Sloan Pennington & Hunter McCarty claimed the title at college fishing’s longest running National Championship on Pickwick Lake in 2017.

In 2022, the ACA National Championship will once again return to McFarland Park in Florence, AL and Pickwick Lake.  Look for UNA to have the chance at making a run at the win there and possibly using that to cement a number one ranking on their home turf to close out the season.

Before wrapping up this feature, we take a brief look at UNA’s points breakdown.  The team from Florence, AL earned 2,040 points at the AFTCO Collegiate Bass Open and has gained an additional 125 points for hosting ACA sanctioned school-run events.  UNA is strategically planning out its 2021-22 campaign and looks poised to carry that same momentum and strategy into the final half of the year.