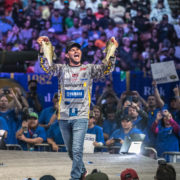 If Jordan Lee’s star was rising last year when he won the 2017 Bassmaster Classic on Texas’ Lake Conroe, you might say it went supernova as he claimed his second Classic victory in four appearances, this one on South Carolina’s Lake Hartwell. With his win, Lee joins an exclusive club of legends to have won back-to-back Classics (Rick Clunn, 1976, 1977; Kevin VanDam 2010, 2011). Lee is also just the sixth angler to have won multiple classics. In another show of dominance, Ranger pros swept the top five spots to claim more than $450,000 in prize money. Each of the top-five anglers fished from a 2018 Ranger Z520L Comanche.

Lee amassed 47-1 throughout the three-day tournament, winning by exactly one pound over fellow Ranger pro Brent Ehrler who vaulted into second from 10th place on the strength of a 16-4 final-day limit. For his win, the 26-year-old Lee took home the $300,000 winner’s check. Jason Christie rode his Ranger to a third-place finish with 45-15 despite leading on Days 1 and 2. Matt Lee, brother to Jordan, sacked 43-15 for fourth place and Jacob Powroznik rounded out the Top 5 and with 43-4. Jordan Lee’s second Classic win puts him over $1 million in tournament winnings in just 52 B.A.S.S. tournaments.

“I don’t know what it is about the Classic,” said Lee. “I don’t get any more motivated. It just happens for me for whatever reason. It’s just one of those things; it was meant to be.”

Lee started the Classic slowly with an unproductive practice that left him without a specific game plan going into the competition.

“I wasn’t sure going into it. I didn’t know if I was going to get five bites a day or 10,” said Lee. “I hadn’t been catching but four to five fish a day in practice.”

Despite his slow practice, Lee made a good showing during day one by bringing in 18 pounds, 10 ounces. The angler focused on fishing around docks with a spinning reel. His primary baits were Strike King’s Rage Swimmer, an Ocho and Shimmy Stick in green pumpkin and green pumpkin/blue. The angler also threw a jerkbait and a homemade blade jig.

“I knew with these conditions it would be perfect,” said Lee. “I was running all over the lake trying to find new water. I didn’t have any waypoints this tournament. I just went fishing.”

“I weighed all spotted bass,” said Lee. “I didn’t have a largemouth all day. You shouldn’t win this time of year on spotted bass. I don’t think you win tournaments like that, except this one.”

Of the 15 bass weighed by Lee throughout the Classic, approximately half were spots. Lee left the take-off on the final day nearly seven pounds behind day-two leader Christie.

“I went back into this one pocket, one creek, and the water was 57 degrees,” said Lee. “I caught a fish, probably my biggest one that day. Under every boat dock there was fish; there were fish everywhere. They were swimming by my boat. It was loaded.”

Lee recently switched to running a Ranger boat competitively but has fished from a Ranger deck since he was a teenager.

“I started out fishing in a Ranger when I was just 16,” said Lee. “I’ve always liked Ranger with its smooth ride and great handling. Comfort is so important on the water and my boat gives me that feeling whether I’m at the console or running the trolling motor on the front deck.”

Murray State Bass Anglers Remember One of Their Own with Annual Spring Invi...
Scroll to top