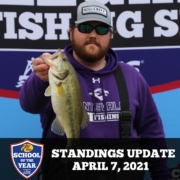 SAN ANTONIO, TX (April 7, 2021) – In just over one month, a winner will be crowned for the 2020-2021 Bass Pro Shops School of the Year presented by Abu Garcia.  However, there is still a lot of fishing to be done for teams vying for the, as well as those hoping to finish the season ranked in the Top 25 in the nation.  Following two recent MLF college events, the University of Montevallo’s lead has shrunk by almost 700 points in total.  Back-to-back defending School of the Year winner McKendree University now trails by just over 1,110 points following a two week stretch that netted over 1,300 points, allowing them to cut into Montevallo’s lead.  Murray State also draws closer to that top spot ever so slightly, as the team is in third place with 11,215 points which keeps them in the hunt for the title as two major ACA double points events remain on the schedule in the Pickwick Slam and BoatUS Championship.

Here is a look at the current Top 25 in the Bass Pro Shops School of the Year presented by Abu Garcia: 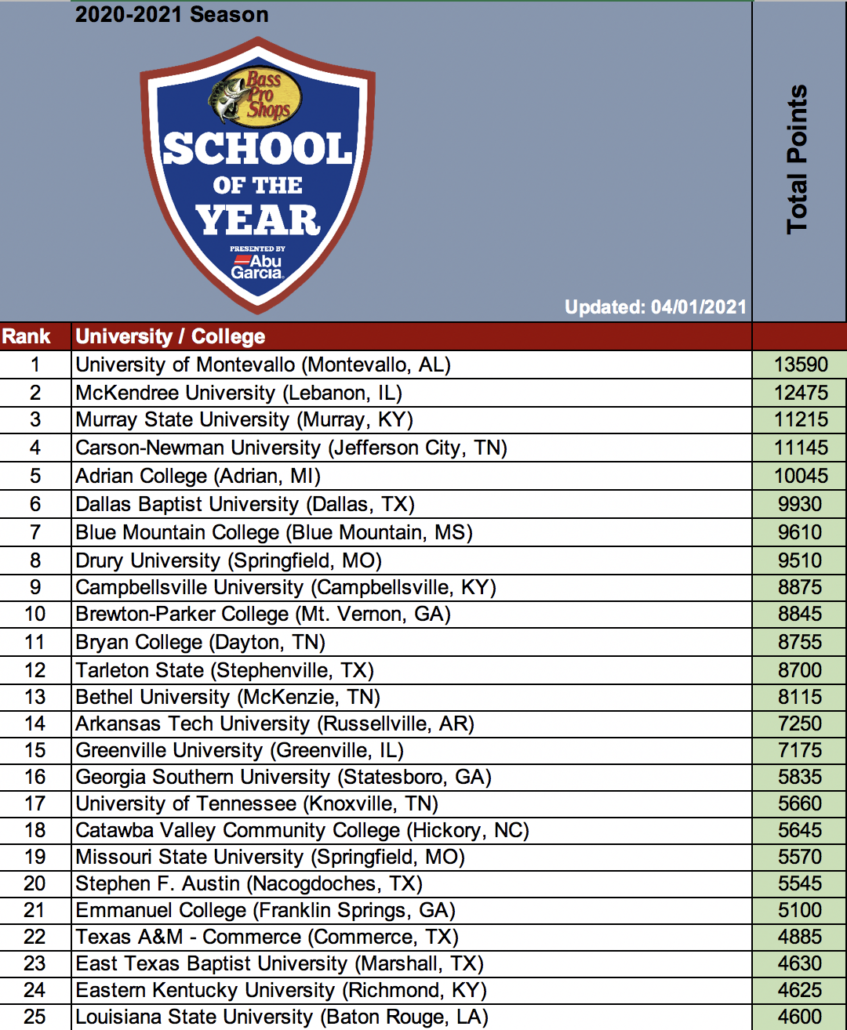 With so many major events having been recently held it’s also of note for some of the top 25 teams who saw a slight downward trend:

Looking back at past updates in the standings, April marks the beginning of the sixth straight month in which the University of Montevallo has held the number one ranking in the Bass Pro Shops School of the Year presented by Abu Garcia.  The team from Montevallo, AL earned points at just one event in this latest update due to how points are awarded.  Aaron Cherry & Chandler Holt finished in 7th place at the MLF Open on Lake Chickamauga with a two-day weight of 32 pounds 15 ounces.  Montevallo earned a total of 720 points for that Top 10 finish.    It’s been no small feat for Montevallo to hold on to the top spot for so long.  Montevallo’s success can be credited to a well-rounded team effort with numerous members contributing throughout the season.

The final double points event of the season before the BoatUS Collegiate Bass Fishing Championship presented by Bass Pro Shops in May is set to be contested this upcoming weekend.  The 2021 Pickwick Slam is scheduled to take place on Pickwick Lake in Florence, AL April 10-11.  A total of 17 of the Top 20 ranked teams are registered to compete in the Pickwick Slam.  Schools will be eligible to earn points for their highest two finishing teams inside of the Top 100.  Follow along on social media, College Series website, and the Outdoor Action TV app to stay up to date on all of the action from this weekend’s event.