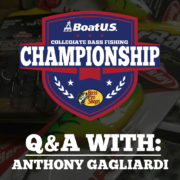 Q: Given the timing of this particular event, how do you think the herring/herring spawn will factor into the fishing conditions at Lake Murray?

A: It’ll probably be really good for some people. I think that there’s still going to be some good fish caught, and guys are probably going to really catch them well.  It just may not be a situation where the whole field smashes them, which could happen sometimes during that bite. But I think it’s going to be a little bit tougher in that regard as there will still be some really good weights caught, but I don’t think that everybody will smash them. There’s going to be some guys that are going to find a little deal and get on them, but some other guys may struggle a little bit if they pursue that bite.

Q: What other bites might be going on that week, besides the herring bite, that anglers could key in on and maybe even fish to their own strengths?

A: I think that there are other things that will be going on that guys can do. Really, if you look back at the Pro Circuit, that’s a perfect thing of how it may set up for this one also. You know, you had some of the herring bite stuff going on.  Some people were catching them spawning, that’s probably not going to happen. You still might have some fry guarders, some late fry guarders.  The river could come into play.  You saw guys going up the river in that last tournament catching them on a frog, catching them on a buzzbait.  So that might still be really good, maybe even a little bit better. I think it’s good from the standpoint of it opening up the whole lake.  When the rivers are fishing well, everybody spreads out because you’ve got guys that like dirty water and stained water.  So, they can go up there and fish their power stuff up there, and fish to their strengths.  It just opens up more of that lower lake if guys are liking that clearer water, and they like to chase after those schooling fish.

Q: Lake Murray is a vast body of water with approximately 50,000 surface acres of water.  Is there a particular section of the lake that could really show out the most, or could the entire lake be in play?

A: Quite honestly, the whole entire lake could be in play, which is great, cause it’s a big lake and it just lets everybody spread out. The fish won’t feel as much pressure from that event.  It’ll make for a better event.  I kind of see it probably playing out about similar to the way ours did.  There will be some herring fish caught.  There will be some fish caught shallow up the lake. I think it will be a shallow event still. It’s going to be a shallow water tournament, just a matter of whether or not they try to target the herring fish or just go up to the dirty water and fish.

Q:  What particular baits from Berkley do you think could be in play during this Championship event?

A: When it comes to the herring spawn stuff, obviously the Berkley topwaters are really good.  The Cane Walker is good when it’s windy and when you’ve got overcast conditions.  I like that one, and I like the Drift Walker.  If it gets calm and it starts to slick off, when they’re biting a topwater bait…I’ll throw the Drift Walker.  If they’re not wanting the topwater bait, then the Power® Jerk Shad is one of the first things I’ll pick up.  I almost won that tournament on the Power® Swimmer.  That’s not normally something I’ll throw for those fish on that bite.  I’ve just been catching so many fish on it this year that when that bite started in that tournament a couple weeks ago, it really worked for me.  That’s really the only baits you’re going to need for that herring spawn.  If that bite’s starting to fall off, a lot of times you can catch them on some type of worm.  The MaxScent Hit Worm on a shaky head, something like that could be good.  Just fish along those same points that those fish have been schooling on.

As far as your river type stuff, obviously your frogs, toads, buzzbaits, and things like that could come into play.  Maybe somebody flips some creature bait or something like that up in the dirty water.

Q:  The 2021 BoatUS Collegiate Bass Fishing Championship presented by Bass Pro Shops is a two-day event.  Do you think it will take 20 pounds each day for a team to have a real shot at winning a National Championship?

A: I would say if somebody caught 20 pounds every day, then you’re the man to beat.  Looking back at ours, it took a little less than that.  With it being a two-day event, it’s going to be a little higher.  With two days, you probably need to get to 36 pounds to feel like you’ve got a shot to win.  I’m not going to put 40 pounds out of the possibility.  For two days, that’s entirely doable.  I wouldn’t feel like I had a shot to win if I didn’t have 20 pounds both days.  If you catch 20 a day, you’re going to be in good shape.