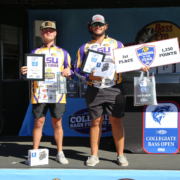 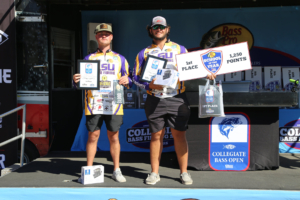 RUSSELLVILLE, AR (October 10, 2021) – The first Association of Collegiate Anglers event of the season is in the books as the scales are closed and prizes have been awarded for the 2021 AFTCO Collegiate Bass Open on Lake Dardanelle.  432 of the top collegiate anglers in the nation competed for two days in hopes of claiming their share of the more than $20,000 in prizes & contingencies that were on the line, as well as double points towards the Bass Pro Shops School of the Year presented by Abu Garcia.  Heath Pinell and Taylor Knowles from Louisiana State University claim first place honors with a two-day total weight of 24.89 pounds.  Robert Gee and Luke Byerly from the University of Tennessee take second, and Griffin Fernandes and Zach Manneback from Adrian College finish the event in third.

Heath Pinell and Taylor Knowles from LSU surged up from back in the standings to claim the school’s first-ever major victory out on the collegiate trail.  Pinell and Knowles entered Day 2 in 18th place after weighing in 10.74 pounds on the first day of competition.  The duo rallied to weigh in the second biggest bag brought to the scales on Day 2 with 14.15 pounds.  Their two day total of 24.89 pounds bests second place by just under one quarter of a pound.

For their first place overall finish, Pinell and Knowles earn a $1,000 Bass Pro Shops gift card, a $50 AFTCO gift card, two HydroWave H2 units, a Rapala tackle package, and a 13 Fishing prize package.  Along with the long list of prizes, the team from LSU also earns $1,000 in contingencies.  This includes $500 for the ACA logo contingency, as well as an additional $500 for the Yamaha ACA Contingency Bonus.  The team’s Top 5 finish also earns them automatic qualification to compete in the 2022 BoatUS Collegiate Bass Fishing Championship presented by Bass Pro Shops at Pickwick Lake.  1,250 points will also be awarded to LSU for the Bass Pro Shops School of the Year presented by Abu Garcia.

Finishing the event in second place overall are Robert Gee and Luke Byerly from the University of Tennessee.  The Day 1 leaders stumbled slightly on Day 2, weighing in just 7.51 pounds for a combined two-day total of 24.76 pounds.  Gee and Byerly caught their Day 1 weight by locking down on the Arkansas River system.  Today, their time down there was cut short by barge traffic moving through the lock. The team had four fish when they locked back through, and failed to catch a fifth keeper fish.  Second place earns them valuable prizes, 1,240 School of the Year points, and qualification into the 2022 ACA Championship.

Rounding out the Top 3 is the Adrian College pairing of Griffin Fernandes and Zach Manneback.  The two backed up their Day 1 catch of 12.47 pounds with an additional 11.29 pounds to finish the event in third.  This Top 3 finish will earn Adrian College 1,230 points to count towards the School of the Year race.  Entering this event with a close to 2,000 point lead and the number one ranking, Adrian College looks poised to hold onto that top ranking when the next update comes out later this week.

The 2021 AFTCO Collegiate Bass Open was a great way to kick off the 2021-22 season out on the Bass Pro Shops Collegiate Bass Fishing Series.  AFTCO’s support of this great event, as the title sponsor, is appreciated by the anglers and staff as they continue to promote conservation and growth of the sport. Special thanks to the Russellville Tourism & Vistors Center for the hospitality this week.

Check back to the website later this week as we provide more in-depth coverage from this event, as well as update the standings in the School of the Year race.