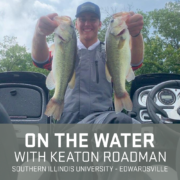 This feature of  “On The Water” is by Keaton Roadman from Southern Illinois University-Edwardsville.

Centralia Lake, in Illinois, is one of many lakes in Illinois people have never heard of. This body of water is in a small town named Centralia, approximately an hour and ten minutes east of  St.Louis, Missouri. This lake has healthy grass, good structure, some ledges, and a healthy population of largemouths. The lake’s max depth is about 22 feet. Most of the lake’s pockets average 12-16 feet deep.

I woke up at 4:00 AM,  and was headed to catch some fish at a lake that has provided a lot of good 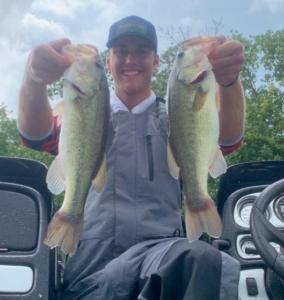 fishing days over the past few years.  There is a particular spot on the north end of the lake that I particularly like to fish. When the wind blows up in there they bite. I know the bigger fish are gonna be holding there when the conditions are right. Today was that way for a while till the conditions changed. I actually won a high school tournament in that exact spot with the same wind and had a 19.2 lb bag.

I ran my skeeter up the lake to a main lake point for the first cast of the morning, and caught a little 14 incher on an Echo Squarebill by Bill-Lewis. I caught 5 fish off that spot, and  they were all tiny so I decided to switch it up. The water was super muddy, so I decided to start flipping. Flipping is something I enjoy doing every chance I get. This lake received continuous rain all week with rapidly dropping water temperatures. The fish were pushed up shallow busting shad in the grass for the first part of the morning.  The biggest one I caught flipping was a 6.32 that day.

The rain moved in and they quit biting a jig so I picked up a MR-6 crankbait. I tried many baits and then finally figured it out for the time being. The fish wanted that crankbait to hit the brush and float up, triggering a reaction bite. If I was burning it they didn’t want it. I think the noise this bait makes is playing a big role in getting these fish interested in biting. I would hit a tree with that MR-6 and let it float up for a few seconds getting continuous bites until the rain moved in. I caught a 4.42 on the MR-6 so my best 5 were looking good for an Illinois body of water. I’m sure you can guess but the fish decided they wanted something else again. 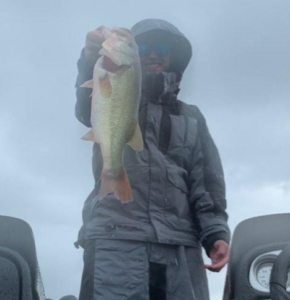 At about 11:00 Am the rain moved in and it was pouring. I put on my Aftco hydronaut suit and kept fishing. The fish started eating topwater. I had a 4 lb fish crush a buzzbait out of the grass. I caught fish on top water from 11-3. The overcast sky and cold rain had these fish hungry and aggressive.

All the patches of grass that held fish this day were all on the main lake. To say the least, I love days on the water where you’re fishing for fun and constantly having to switch it up. Those are key learning days on what those fish are wanting. Fishing is a sport of constant learning and that is what makes a successful angler. In my opinion any day I can be on the Lake I’m going to be there. Today it happened to pay off. As the day went on, I modified my lure selections… and presentations to adapt to what the fish were telling me.