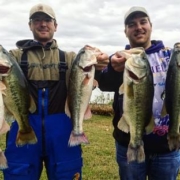 PARIS, TN (November 7, 2018) – Some of the best college anglers in the Kentucky Lake region battled the cold, high winds and large waves in the 2018 Murray State Fall Invitational out of Paris Landing State Park in

Buchanan, TN. Anglers were able to find bass in both their typical fall and early winter patterns. The fall topwater pattern on the Tennessee River held true, as many competitors caught their fish from main lake bars and flats with topwaters such as walking baits or whopper ploppers. Many anglers reported successful practice sessions on this pattern, but struggled on the tournament day due to the high wind and large waves on the main lake, making many areas unfishable during the tournament. Others found groups of fish in deeper water and were able to catch them on baits such as jigs, Carolina rigs, umbrella rigs and swimbaits. Overall, there were twenty-five teams from ten different colleges in the event from Kentucky, Tennessee, Illinois, Indiana and Alabama. Despite the tough conditions putting a damper on the weights for the day, we had a successful and safe event.

The team of John Garrett and Kyle Palmer from Bethel University took home first place with a five bass limit of 18.57lbs. Coming in second was the duo of Scott Ellis and Ryan Headrick from the University of Tennessee with five bass for 16.61lbs. Bethel teammates Brad Ableman and Seth Roberts took the third place prize with 14.65lbs. Nathan Doty and Jacob Louis from McKendree University finished fourth with a limit worth 12.89, and Murray State University teammates Parker Nesbit and Canyon Kenny rounded out the top five-with four bass for 11.81lbs. FULL RESULTS