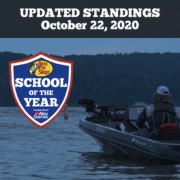 SAN ANTONIO, TX (October 22, 2020) – The Association of Collegiate Anglers contested its final event of the fall at Lake Dardanelle for the AFTCO Collegiate Bass Open on October 10th-11th.  This particular tournament is a double points event that greatly impacts the standings for the Bass Pro Shops School of the Year presented by Abu Garcia.  Although Murray State only placed one team inside of the Top 40 at the AFTCO Open, they managed enough points to hold on to a five-point lead over second-ranked Adrian College. 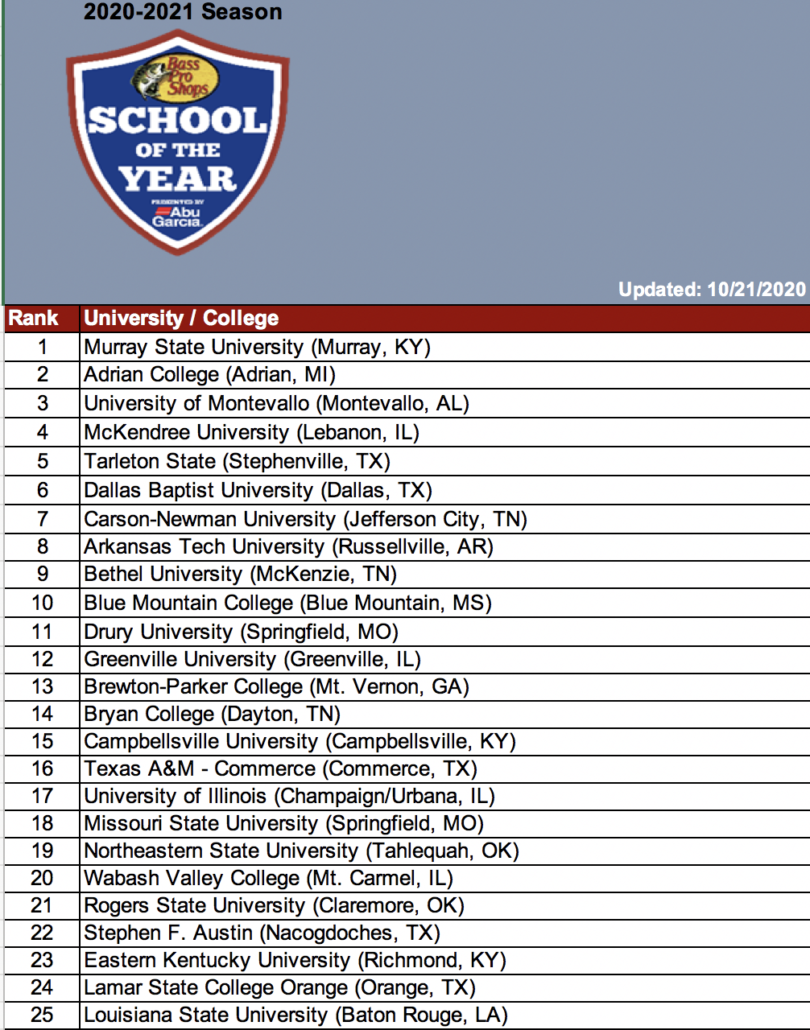 The margin separating the Top 5 teams has narrowed drastically over the course of the last few weeks.  Less than 650 points separate first place from fifth overall.  Murray State’s top two teams at the AFTCO Open finished in 4th & 50th, earning the School of the Year leaders a total of 1,480 points.  That showing of less than 1,500 points was the worst amongst the Top 5 teams in the School of the Year race leaving Lake Dardanelle.    Adrian College bested Murray’s total by 40 points to close the gap between the two top-ranked schools to just five points.  Tarleton State squeaks into the Top 5 for the first time this season after earning over 1,500 points from the final ACA event of the fall.

Here is a look at other significant movers amongst the Top 25:

Louisiana State University, located in Baton Rouge, LA, moved from outside of the Top 100 in the previous rankings all the way up into the 25th spot.  Their two highest-finishing teams placed 8th & 14th at the AFTCO Open to earn a total of 1,800 points.  Two other teams made significant moves up into the Top 25, as Rogers State & Northeastern State climbed more than 50 places each to reach their current spot in the rankings.

Only a handful of events remain in 2020 before the calendar flips over to 2021 and the spring season begins.  Here is a look at several upcoming events that qualify for School of the Year points:

View the complete schedule of School of the Year qualifying events.