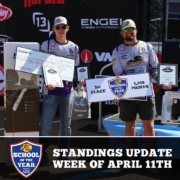 Auburn University is 1,315 points behind in 2nd, and two-time winner McKendree University moves up to 3rd

SAN ANTONIO, TX (April 16, 2022) – Recently, the Association of Collegiate Anglers contested the Barnett Reservoir Rumble, the final ACA double points event before the year-end BoatUS Collegiate Bass Fishing Championship presented by Bass Pro Shops which this year will be held at the end of May on Pickwick Lakle in Florence, Alabama.  At the conclusion of that event not only will the number one team be named in the Bass Pro Shops School of the Year presented by Abu Garcia, but also the Top 25 in the nation will be recognized.

At the recent event on Barnett Reservoir, 15 of the Top 20 bass fishing teams in the nation were present, including 8 of the 10, competing in the nationally televised event.  When the last casts were made, top-ranked University of Montevallo finished the tournament in a dominating fashion by placing teams in 1st and 2nd place overall to extend the school’s lead over second ranked Auburn University.  Two-time school of the year title winner McKendree University also had a great event and earned 3,150 points in this update to move into third, just under 2,000 points behind the number one ranked Montevallo Bass Team.

As was foreshadowed entering the event, the Barnett Reservoir Rumble proved to be key in defining the chase for 2021-22 Bass Pro Shops School of the Year presented by Abu Garcia with just over one month left in the prestigious race.  The Association of Collegiate Anglers awarded a total of 78,650 points to 38 college bass fishing clubs/teams.

Number one ranked University of Montevallo earned the most points of any team competing in the Barnett Reservoir Rumble.  Finishing the event with teams in 1st and 2nd overall in the standings, Montevallo was awarded a total of 2,490 points at the ACA double points event.  Montevallo team members Merritt Arnold and Chance Schwartz won the tournament with a two-day total of 30.15 pounds.  The duo took home over $5,000 in prizes and contingencies, as well as 1,250 points.  Fellow teammates Adam Carroll and Trey Dickert claimed second, earning 1,240 points to count towards the Bass Pro Shops School of the Year presented by Abu Garcia.  The University of Montevallo earned the most points of any one school competing in the Barnett Reservoir Rumble.  Montevallo has been the highest points earning team at both ACA double points events this season, receiving 4,870 points of the maximum 4,980 a single team could earn this season, which further cements their team as one of the most dominant in collegiate bass fishing in recent memory.

The latest update to the standings also includes points from the MLF Central Regional on Table Rock Lake.  Clay Henderson and Zachery Ward from Drury University won the event, earning 1,000 points and helping Drury to maintain its position in sixth place.  The McKendree University pairing of Devon Rathbun and Lane Stephens took second place at the MLF Regional.  Combined with the points earned at the Barnett Reservoir Rumble, McKendree University received a total of 3,150 points last weekend.

Here is a look at some notable movers in the Top 25 for the Bass Pro Shops School of the Year presented by Abu Garcia from this latest update:

Taking a quick look at the latest updates to the Bass Pro Shops School of the Year presented by Abu Garcia, 18 of the Top 25 earned points at the Barnett Reservoir Rumble, including 9 of the Top 10.  Five of the Top 25 ranked teams earned over 2,000 total points in this points update.

View the remaining points qualifying events on the schedule, here.