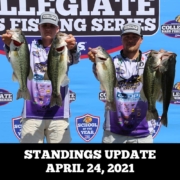 SAN ANTONIO, TX (April 24, 2021) – The race for 2020-21 Bass Pro Shops School of the Year presented by Abu Garcia is entering its final month before a winner is crowned at Lake Murray on May 27th.  This latest breakdown of the School of the Year standings is highlighted by results from the Pickwick Slam (ACA double points), and an MLF Regional held at Lake Somerville.  The next update will come in early May.

To recap the race, the second to last Association of Collegiate Anglers major event that features double points provided a giant shakeup to the standings.  16 of the Top 18 teams in the standings competed at Pickwick Lake, allowing many of those schools to earn over 1,000 points and create a major shift in the national standings. 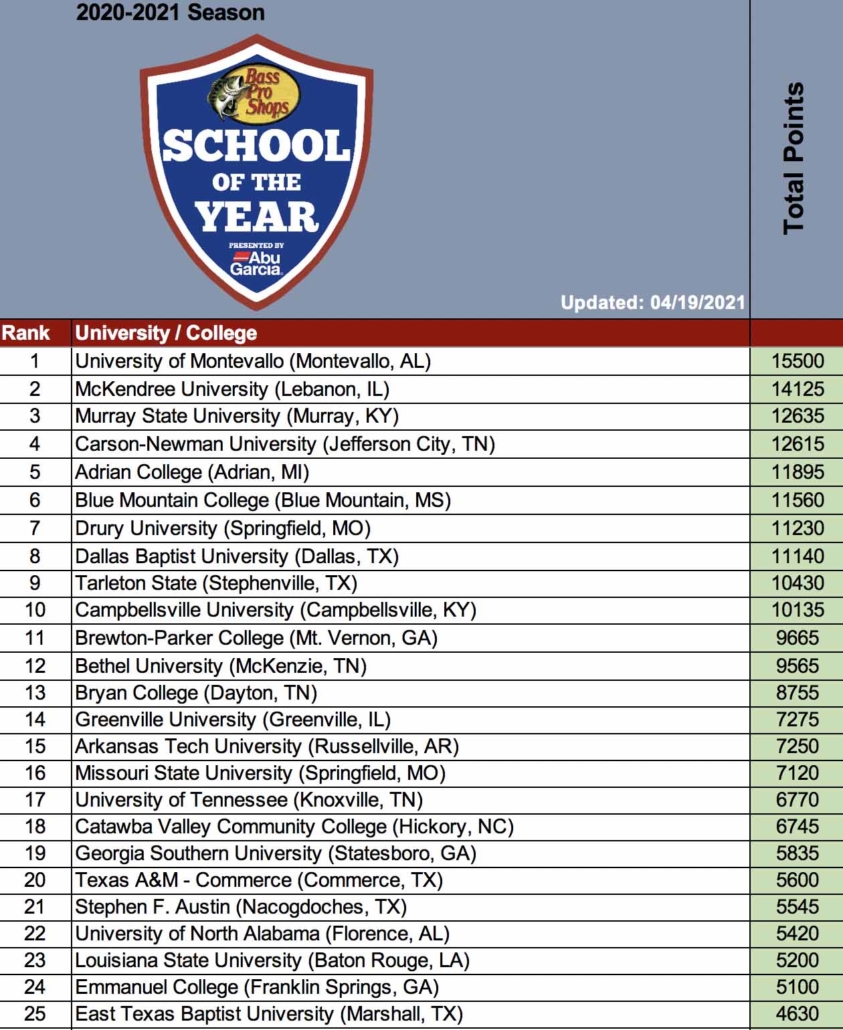 Going on almost seven months now, the University of Montevallo has occupied the top spot in the rankings.  This run by Montevallo marks one of the longest stints in the history of the School of the Year race in which a team has been ranked number one.  Montevallo’s team goal of winning the Bass Pro Shops School of the Year presented by Abu Garcia received a sizeable boost following the completion of the Pickwick Slam as James Willoughby and Chance Schwartz won the event with a two-day total of 45.42 pounds.  Another Montevallo pairing, Jordan Pennington and Tyler Cain, also finished in the Top 10 to help Montevallo maximize the double points opportunity offered at this ACA ran event.

Here are several other teams that made moves upward in the School of the Year standings:

All of the Top 12 teams in the latest standings update competed at the 2021 Pickwick Slam.  6th ranked Blue Mountain College earned the most points of any team that competed at Pickwick Lake.  The Toppers Bass Team from Mississippi earned a total of 1,950 points.  The team’s performance was bolstered by back-to-back 3rd and 4th place finishes by the teams of Young & Overton, and Lewis & Edwards respectively.

Former School of the Year winners University of North Alabama made the biggest jump up in the standings of any team ranked in the Top 25.  The hometown team from Florence, AL used their local knowledge of Pickwick Lake to earn a total of 1,710 points.  Those points allowed UNA to move up a total of 14 places from 36th to 22nd in the latest update which now moves them into the Top 25 schools in the nation.

With so many top-ranked teams competing at the ACA Pickwick Slam double points event, there was no room for error for teams to slip by with a mediocre performance or not compete at Pickwick Lake.  The teams that dropped most in the national standings are highlighted below: