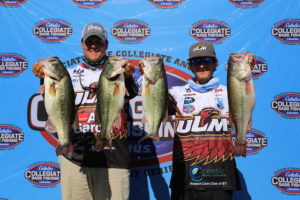 “Most of all, I’m looking forward to fishing Pickwick Lake. The Tennessee River is just an awesome fishery and it’s awesome to be able to fish ledges and pattern these fish. I love being able to watch the fish on the graph and catch them,” said Eaton. “Also, the way the tournament is put on is like no other. The food, the banquet, meeting the pros, Yamaha Appreciation Night – it’s the most fun I’ve had outside an actual tournament.”

As Eaton’s collegiate bass fishing career is now winding down, he plans to leave nothing behind and swing for the fences at the 2016 BoatUS Collegiate Bass Fishing Championship Presented by Cabela’s.

“This will be my last tournament and I plan on going out with a bang. My partner, Jackson Blackett, and I are going for the ‘W’ and I can’t think of a better way to end my college career than taking home a win from the BoatUS Championship,” said Eaton.

In order to take home the top prize at the championship event, Eaton understands the strategy and hard work needed in order to put himself and his teammate in contention for the win.

“Pickwick strategy definitely changes from year to year. I remember my first year trying to figure out the currents and I had no clue about them. I tried going up shallow, but I know now that if you want to win, you need to go deep,” said Eaton. “Ninety percent of our practice time at Pickwick, we don’t even make a cast. Here in Louisiana there aren’t any lakes like Pickwick, so that couple days of practice before the tournament is crucial. It’s cool to see how we’ve gotten better every year on that lake and last year we had our three teams all in the top twenty in the championship.”

The 2016 BoatUS Collegiate Bass Fishing Championship Presented by Cabela’s not only offers the ULM team a chance to win a championship event with the best of the best collegiate anglers, but it gives the team one final opportunity to earn hundreds of valuable Cabela’s School of the Year points; something the team values as much as tournament victory.

“We’ve always thought of this event as a way to prove how good your team is because you’re competing against the best collegiate anglers in the nation, but this tournament is critical in earning School of the Year points. We’re currently in 9th in the Cabela’s School of the Year race so we really want to show how good our club is by winning the title this year,” said Eaton.

The 2016 BoatUS Collegiate Bass Fishing Championship Presented by Cabela’s will take place during the week of May 23 in Florence, Alabama. For more details about the week’s events and festivities, including Yamaha Angler Appreciation Night, a Flip, Pitch, and Cast Contest giving away over $5,000 in prizes, and the Registration Banquet, visit this link: More Details