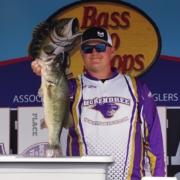 University of Montevallo remains in 2nd, and Adrian College drops down to 3rd in National Rankings

SAN ANTONIO, TX (October 26, 2022) – For the first time this season, a new school sits atop the rankings in the race for Bass Pro Shops School of the Year presented by Abu Garcia.  Two-time school of year title winner McKendree University (2019, 2020) jumped up from third in the previous update to take over the top spot in the latest National Rankings just released by the Association of Collegiate Anglers.

After earning over 4,600 points through recent high finishes at several events, McKendree University is now in first place with 18,835 points.

Sitting in second place, less than 700 points behind McKendree, is another back-to-back School of the Year champion, the University of Montevallo (2021, 2022), with 18,155 points.  Adrian College drops from the top spot for the first time this season.  Adrian falls to third with 18,120 points and is now just over 700 points behind first place.

McKendree University’s top ranking is a major benchmark for a program that is a two-time winner of the Bass Pro Shops School of the Year presented by Abu Garcia.  This marks the first time since McKendree claimed its last title in May of 2020 in which they have been ranked number one in the nation.

McKendree’s charge to the top spot was bolstered over the last few weeks by two strong showings at major college tournaments.  Following the AFTCO Collegiate Bass Open on Lake Dardanelle in Russellville, AR earlier this month, McKendree traveled north to Lake of the Ozarks to compete in the MLF Central Regional.  Then ranked third in the nation, McKendree placed two teams in the Top 10 to earn over 2,400 points.  Matthew Cavanaugh & Jason Qualich finished in fourth with 15 pounds 14 ounces, and Kai Barnett & Gage Blimling took seventh with 14 pounds 10 ounces.

With two major double points events occurring over the past several weeks, there has been a lot of movement in the standings amongst the top teams in the nation.  Here is a look at several teams who made major moves inside of the Top 25 in the Bass Pro Shops School of the Year presented by Abu Garcia:

Three teams jumped up into the Top 25 following good showings at events over the course of the past two weeks.  Missouri State (Prev. T-26th), Greenville University (Prev. T-26th), and Arkansas Tech (Prev. 30th) all made big moves up to be ranked 22nd, 25th, and 23rd respectively.

Though their position in the rankings did not change, Auburn University had one of the most impressive showings of the season at Pickwick Lake last weekend.  The school’s two highest-finishing teams placed first and third out of the major field.  Blake Milligan & Matthew Parrish won the event with 18 pounds 7 ounces, and Rob Cruvellier & Carson Maddux finished in third with 17 pounds 11 ounces.  Those two top finishes earned Auburn University 2,480 points.

Auburn has competed in just one MLF major event this season, earning points at their lone MLF Southeast Regional.  This means that when the updated program details go into effect on January 1, 2023, provided they don’t compete in an out of conference event prior to that time, they will be eligible to earn points at four MLF major tournaments (excluding the 2023 MLF Championship). Going into the second half of the season, Auburn has room to make up a lot of ground on the teams in front of them in the standings.

Taking a closer look at the Top 3 teams in the standings, it is obvious that the 2022-23 race for Bass Pro Shops School of the Year presented by Abu Garcia is going to come down to the wire at Lake Hartwell in May, at which schools will be eligible to earn triple points with top finishes. Adrian College has earned points at 13 events and McKendree University 12, with both schools receiving points in the same number of major events. Having competed in the maximum amount of MLF events possible thus far, both Adrian and McKendree will be able to earn points at two MLF major events in the spring of 2023 to reach their maximum total of five.

Like their fellow statesmen at Auburn, Alabama based University of Montevallo has competed in two MLF events to this point (with one being out of conference).  This means they can earn points at their first three MLF major events competed in during the Spring of 2023 prior to the ACA Championship next May.  Montevallo has earned points at a total of 11 events this season.

As the fall semester nears an end, there is a lot of season left and plenty of points earning opportunities on the schedule.  Click here to view a list of points eligible events for the 2022-23 Bass Pro Shops School of the Year presented by Abu Garcia.