SAN ANTONIO, Texas – Many think that college fishing resides solely in the continental U.S., however, Canadian Collegiate Bass Anglers are here to prove that college fishing is not just gaining popularity nationally, but internationally as well. The two Canadian teams consisting of Jon Flint and Eric Roussin, and Luc Larochelle and Cole Vardy will be making the international journey down to Florence, Alabama this May to compete in the 2016 BoatUS Collegiate Bass Fishing Championship Presented by Cabela’s on Pickwick Lake.

A recent graduate of Niagara College and Ontario native, Jon Flint, was one of four accomplished qualifiers given the opportunity to compete in the 2016 BoatUS Collegiate Bass Fishing Championship Presented by Cabela’s. Flint and his partner, Eric Roussin, and Luc Larochelle and Flint’s former partner, Cole Vardy, competed individually against other Canadian College Federation members to earn their spot in the Championship event. 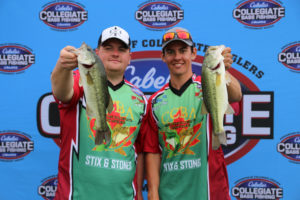 “I think it will help a lot to have two teams down at Pickwick this year. We can work as one big team in practice and share information, which is something that we always do. We’re pretty helpful to all of our teams, and try to help everyone succeed,” said Flint.

As a first time participant in the 10th Anniversary BoatUS Collegiate Bass Fishing Championship Presented by Cabela’s, Flint knows what to expect this year, however, Flint is now getting the chance to show a newcomer what college fishing is all about.

“I’m expecting more of the same really for this year – this is the biggest tournament I’ve been a part of,” said Flint. “I’ve seen a lot of the sponsors on Facebook lately, which has been awesome, but I’m really looking forward to seeing how my partner reacts to it all as this is his first event as a college angler.”

When asked what Flint’s goals are at the Championship event, Flint stated that “the idea of being the first Canadian team to win it really excites me and would be an awesome accomplishment for sure, but also meeting all the pros, meeting guys from different clubs and getting exposure on national TV is pretty awesome too. Overall, just being able to experience this type of event is an accomplishment in itself.” 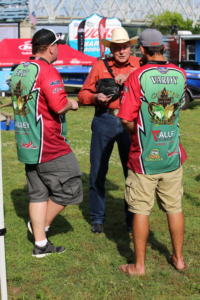 As his first time on the Tennessee River in the 2015 event, Flint experienced what Pickwick Lake is famous for – current and ledges. In his short time on the impoundment Flint and Vardy did their on-the-water research and are planning accordingly this year.

“The fishing is a toss-up every year it seems. I’ve been watching some reports, and right now looks like the spawn is still going on, but by the time we get there I think it will fish a lot like it did for us last year so fishing the current and ledges will be pretty key, I believe,” said Flint. 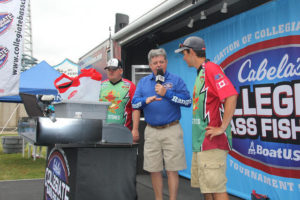 Along with getting away from the cold for a bit, Flint and the rest of the Canadian anglers are looking forward to being a part of such a big collegiate event.

“I loved how hospitable the whole event was. We didn’t feel out of place in Florence at all. We don’t have any events even close to the caliber of the championship up here, so It was great be a part of it all last year and I’m looking forward to it again this year.