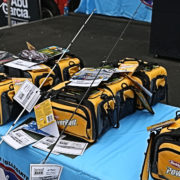 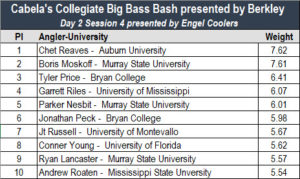 The session 4 results are final.  Take a look at the top 10 from the final session on day 2.

Our live blog coverage has concluded.  Thank you for following along with us this weekend, and supporting these college anglers.  Be sure to go to our social media pages for more photos and content.  Later this evening we will post a recap from day 2, along with a look at the top 5 overall big bass of the event. 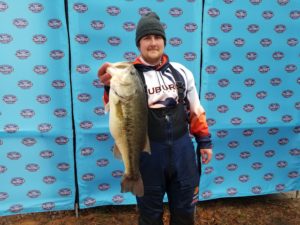 Chet Reaves of Auburn University wins session 4 presented by Engel Coolers with 7.62 lbs.  This last minute fish brought in by Chet was a Kentucky Lake stud.

Jut 5 minutes remain in competition!  Then this event will be wrapped up! 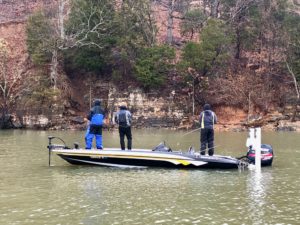 Just over 30 minutes remain for anglers to check in with fish for this final weigh-in session presented by Engel Coolers.  A 7.61 lb fish is leading session 4.  These anglers are going to need to bring in a solid fish to take over the lead. 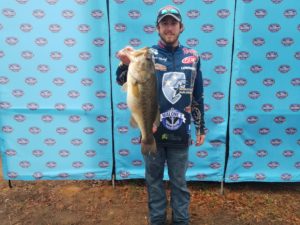 Boris Moskoff from Murray State University is in the lead early on in session 4, the final session of the day.  This 7.61 lb bass will be difficult to top with just one hour remaining. 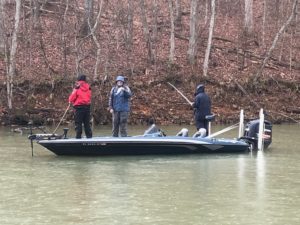 One hour and ten minutes remain in the final session of the 2018 Cabela’s Collegiate Big Bass Bash – presented by Berkley.  It is still very cool and damp outside.  The rain, however, has stopped.  Along with the break in the rain, the wind has also let up quite a bit.

The amount of anglers weighing in late in session 3 was very impressive.  The fish are biting out there.

Similar techniques are being used today as were used yesterday. Crankbaits, spinnerbaits, and swimbaits are all being used to catch fish.  One difference between the two competition days is that flipping and pitching seems to be more of a player today.  The current big fish in session 4 was caught flipping shallow bushes. 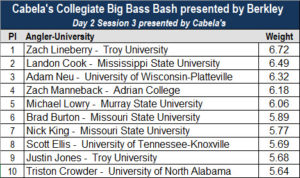 With session 3 in the books, the top 10 results are now final.  The smallest fish to claim a prize was 5.64 lbs.  The weights were very strong.  Though things were slow throughout a majority of the session, things came to life quick with about15 minutes to go.

Session 3 is complete and Zach Lineberry holds on for the session win with 6.72 lbs.  Top 10 standings will be posted shortly. 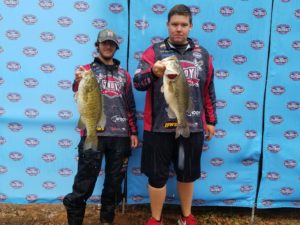 Zach Lineberry(pictured on the right) shoots to the top of the session 3 leaderboard with 6.72 lbs.  With 15 minutes left in the second to last session, we’ll see if it can hold on. 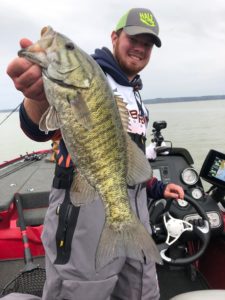 The number of smallmouth brought to the scales has been impressive.  Every single one of them has been extremely healthy.

Anglers are reporting catching all of these smallmouth on either a swimbait or an Alabama rig.  Those are always good bets to catch a smallmouth on.  There should be plenty more to come to weigh-in before the end of the day. 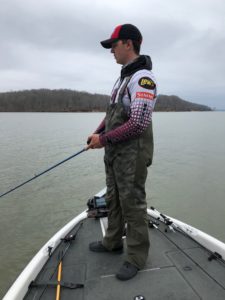 Just over 40 minutes remain in session 3 presented by Cabela’s.  The rain has let up some here in Paris, TN.  As the day goes on, rain chances will continue to increase.

One would think conditions such as these would trigger fish to bite.  Low pressure moving in with these rain showers is conducive to making fish bite.  These last couple of hours could produce some quality fish catches.  We should know more soon as the end of this session draws near. 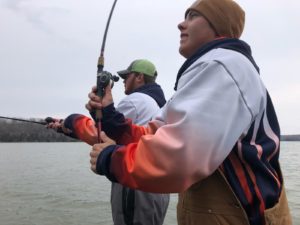 Anglers are coming into the weigh-in tanks at a very slow rate.  Fish catches, again, continue to be few and far between.  What fish are crossing the scales right now are still solid fish. 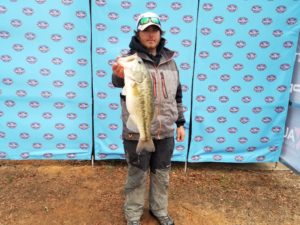 The current leader of session 3 presented by Cabela’s is Triston Crowder from the University of North Alabama.  Triston weighed in a 5.64 lb largemouth early on in this session. 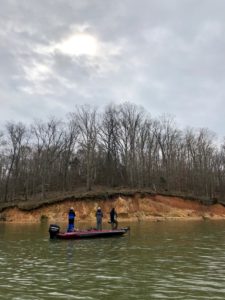 Session 3 presented by Cabela’s is underway.  Rain has began falling at the weigh-in site.  It is expected for this to continue through the end of the event.

Fishing seems to have slowed down later into this morning.  Only 26 fish crossed the scales in session 2.

The top 10 results from session 2 presented by Gill are final.  This is the first session of the weekend where a fish under 5 lbs placed in the top 10. 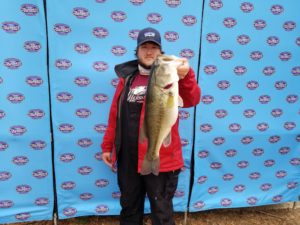 Andrew Chapman from Wallace Community College – Dothan takes session 2 with 7.17 lbs.  Andrew weighed in early on during this session presented by Gill, and it stood up for the remainder of the session. 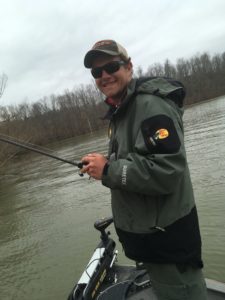 Joseph Bruener from McKendree University is smiling because he’s getting to fish another day on Kentucky Lake, and has an estimated 5 pound fish in the livewell.  5 pounds seems to be the magic number this weekend.  We’ll know soon how this fish will stack up against the field. 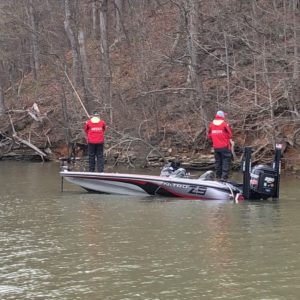 On the water reports are few and far between at the moment.  The action at the scales has slowed down as well.  There are 30 minutes left in session 2 before the top 10 weights are declared.

It is very cool outside right now.  Air temperatures are around 49 degrees.  A brisk wind is also blowing 10-20 mph.  The rain that was forecasted has yet to impact us here at the weigh-in location in Paris, TN.  Rain chances are going to increase drastically as we head into the afternoon hours.

Andrew Chapman is the current leader of session 2 presented by Gill.  From Wallace Community College – Dothan, Andrew weighed in a 7.17 lb largemouth bass. 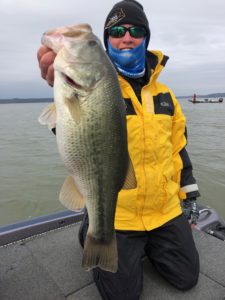 Here is Chase Serafin of Adrian College with what is estimated to be a 5 pound fish.  So far today, the pattern is continuing of a minimum size of 5 lbs being needed to earn a top 10 place in each session.  It took 5.04 lbs to place in session 1 earlier this morning. 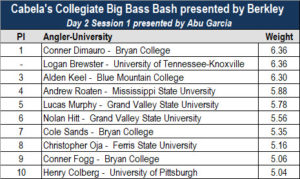 Session 1 is completed, and the top 10 results are final.  10th place took a minimum weight of 5.04 lbs to earn a prize. 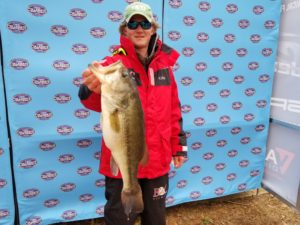 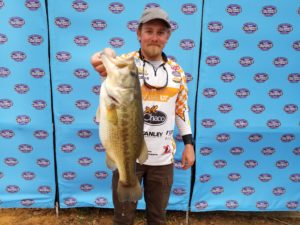 Session 1 finishes in a tie at the top.  Logan Brewster from the University of Tennessee – Knoxville and Conner Dimauro from Bryan College each brought a fish to the scale weighing in at 6.36 lbs.

10 minutes are left in session 1!  Fish are continuing to come across the scales.  Weights are down just a little bit so far.  We expect to see a good flurry of anglers leading up to 9:00 am. 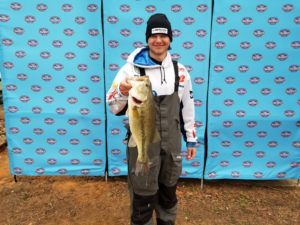 The benchmark has been set for session 1 presented by Abu Garcia.  Alden Keel from Blue Mountain College weighs in with a 6.30 lb largemouth bass.

Yesterday, Alden placed 3rd in session 4 with a 7.21 lb fish.  Those are quality fish to be catching with such consistency.  Fellow Blue Mountain College teammate Ty Cox won session 3 on day 1 with 8.94 lbs.  This group of anglers from Blue Mountain College are definitely around the fish needed to do well in this big bass event. 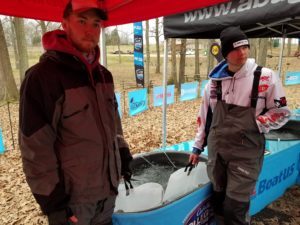 The first wave of anglers are making their way up to the weigh-in stage with their fish.  As those fish cross the scales, we will wait to see how high the bar is set for the largest bass early on in session 1 presented by Abu Garcia. 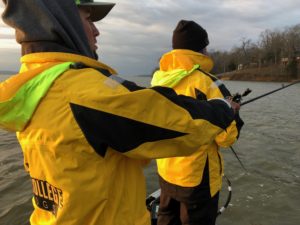 We are halfway complete with session 1 presented by Abu Garcia.  The on the water reports have been rolling in fairly steady.  This is a good sign early on in the final day, as conditions have changed slightly compared to day 1.

Pictured above are Chase Serafin and Cody Batterson of Adrian College.  Chase earned a prize during one of yesterday’s sessions.  Serafin took 4th place in session 3 with a fish weighing 5.83lbs.

In each of yesterday’s sessions, it took no less than a fish weighing 5.03 lbs to claim a top 10 prize.  Weights tend to drop ever so slightly on day 2.  Anglers who can find a way to catch a 4.5-5 lb fish could have a better opportunity at placing today. 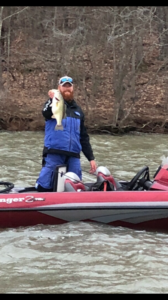 Grand Valley State University checks in with another fish.  This time it’s Nolan Hitt getting on the board.  Nolan came to the scales on day 1 with a 5.47 lb fish.  That was good enough for 10th place in session 2. 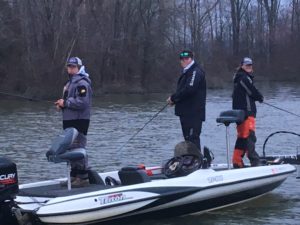 Pictured above are anglers competing for Itawamba Community College.  Itawamba had an angler place in two of the four sessions yesterday.  Given the strong weights put up by the field, that is a good showing.

The wind is definitely more noticeable today.  At about 10-20 mph, it will not only add a chop to the water, but will also provide an added chill to the already cooler temperatures. 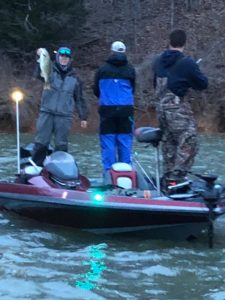 Lucas Murphy from Grand Valley State University is on the board with this early fish catch.  This is the first report of a fish catch that we have received.

Lucas won session 2 on day 1 with a nice largemouth weighing 7.27 lbs.  An early fish like this nice smallmouth is a good confidence booster on day 2.  Catching a decent fish early can help to ease the nerves and allow an angler to fish more calmly. 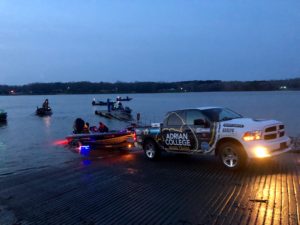 Fishing is officially underway on Kentucky Lake.  Adrian College is looking to have a strong showing today.  Team member Jack Hippe finished 2nd in session 2  on day 1 with 6.83 lbs.

During each weigh-in session yesterday, the winning weight increased gradually.  The conditions could put a damper on that trend today.  Session 1 is underway from now until 9 am, and we will be anxious to see if the big fish continue to show up. 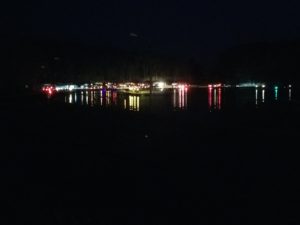 Boats are continuing to launch here in Paris, TN as official launch quickly approaches.  At 6:45 am, competitors will be able to begin to make their way out onto Kentucky Lake.

All week, the main focus has been on the high water levels across the Tennessee River system.  Over the past few days, Kentucky Lake has fallen significantly.  As of this morning, total elevation is 361.74.  The lake is projected to drop nearly another foot to 360.82.

One thing that is for sure from yesterday, the falling water levels did not have much of an impact on most of the competitors.  Don’t expect today to be any different.  Here in a few hours, we will start to see how the bite is setting up early on in day 2.

As was mentioned in the first update, weather is going to have an impact on today’s event.  Starting out this morning, temperatures are right around 48 degrees.  This is also expected to be the high temperature as the day progresses.  In comparison to yesterday, the anglers will experience temperatures nearly 10 degrees cooler than what they encountered on day 1.

Not only is the temperature dropping, there is a strong chance for rain beginning late morning.  At 10 am, there is projected to be a 40% chance of rain.  As we move into the afternoon, rain chances will increase to 100%.

The rainfall is not expected to be a significant amount.  It will be a steady rain, just enough to bother these anglers while they are out on the water.

Good morning from Paris, TN and the famed Kentucky Lake!  We are set up and ready to cover final day action from the 2018 Cabela’s Collegiate Big Bass Bash – presented by Berkley.

Today, competitors will be taking to the water at 6:45 am, once again in search of the biggest bass they can catch.  The conditions will be changing throughout the day today.  Stay connected with everything going on out on the water, and here at the weigh-in site.  Throughout the morning, leading up to take off, we will set the scene for today and get you up to date on everything you need to know as we inch closer to final day action!