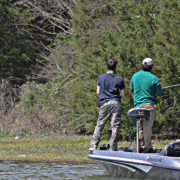 Coverage of the 2017 Cabela’s Collegiate Bass Fishing Open will be right here!  Check back often for the latest insights about what’s happening on the water, which teams are catching them, and more!

For those of you that would like to keep up and view all the photos or even look back at past events from the series, be sure and check out the photo gallery where you’ll see photos from each day, on the water action, and more.

Head over to the Live Stream to watch the LIVE weigh-in startng at 3pm. We will also post updates and pictures on our facebook at https://www.facebook.com/CollegiateBassChampionship/ . We also will post pictures on Instagram all weigh-in. Check back on the blog after weigh-in for stories and updates after weigh-in.

The afternoon bite has been tough. Fish catches were far and few between after about 11am that we saw. Going to be an action packed weigh-in starting at 3pm

Few hours left to go and the teams are really starting to work as one to make sure they get the six fish limit. Temps have climbed up into the 70’s and the wind is still very light out of the south. The stained water has not changed much for the anglers and they are still catching them. Be sure to tune in to the website at 3pm for the Live Weigh-in presented by Garmin and RAM Trucks

Texas Tech has a limit in the boat.

Reports of fish catches are starting to come in. Murray State’s Team sitting in third just put their second fish in the boat.

Lots of areas seem to be more stained than yesterday. There are also no clouds in the sky so anglers are going to have to adapt to these conditions and make some changes. 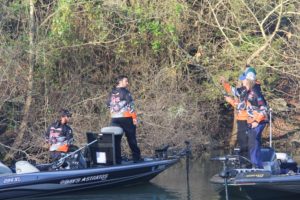 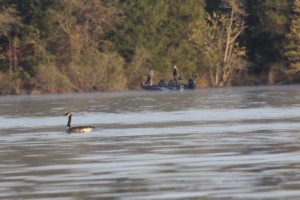 Murray State University already has the first fish in the boat. 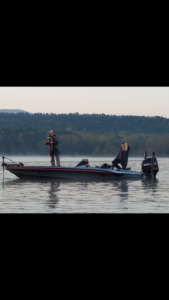 The anglers are starting to launch for the second day of the Cabela’s Collegiate Bass Fishing Open. We will have the take off for everyone at home that wants to watch on Facebook Live.