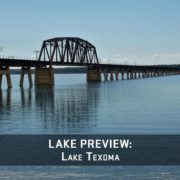 The third major televised event of the 2017 Cabela’s Collegiate Bass Fishing Series is now only weeks away. College anglers from around the country will be heading to Lake Texoma in Denison, Texas for the Texas Collegiate Challenge presented by Abu Garcia. 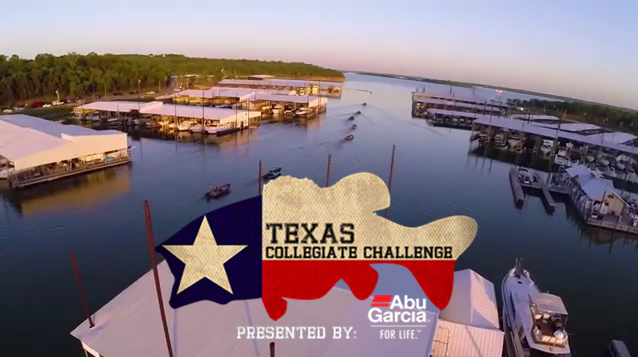 Lake Texoma is situated on the Texas/Oklahoma border and covers over 89,000 acres, making it the 12th largest USACE lake in the country. Lake Texoma was formed in 1944 with the damming of Red and Washita Rivers. Lake Texoma is known in the area for being one of the best smallmouth lakes around, with the smallmouth lake record coming in at 7.06lbs. The lake also has a great population of largemouth as well as spotted bass, and both will come into play in this event. Team Cabela’s Member and Bassmaster Elite Series Pro Jeff Kriet lives less than an hour from Lake Texoma and shares his thoughts on targeting largemouth vs. spots vs. smallmouth:
“The fishing at Texoma right now is unbelievable.  They are wrecking them.  The smallmouth will absolutely play.  There are so many 4+ pounders on the lake.  Guys fishing between the bridges on rock and sand will catch them along with largemouth.  I would definitely think the winner will have some smallmouth in their bag.  However, the winner won’t have entirely smallmouth.”
In the past few years, Lake Texoma has seen record low water conditions as well as historic flooding to the lake; currently Lake Texoma is 1.2 feet low. Lake Texoma has a wide variety of cover and structure for the anglers to target. On the southern end towards the dam, anglers will find steep rock cliffs with deep water close by. For anglers venturing further west up the Red River and North up the Washita River timber, shallow flats, some flooded shoreline vegetation and more stained water is what the anglers should expect.  Marina’s will also be a factor at this event. Lake Texoma has numerous marinas that anglers can focus on, and with the possibility of the shad spawn being underway they may be a key factor.
The bass should be in all stages of the spawn: pre, during, and post. Lake Texoma has very clear water on the southern end of the lake where sight fishing may be a key technique with more of the stained and dirty water up the rivers making sight less effective.  Lake Texoma is in the backyard of Team Cabela’s Member Jeff Reynolds. Jeff shared his thoughts on what he thinks the anglers can expect this time of year on Lake Texoma:
“The shad spawn will be going on. Spinner baits, swim jigs, and top waters will work best. Later in the day square bills on rock points will work. Carolina rigs could work as well as most of the bass spawn should be over.”
The 2017 Texas Collegiate Challenge presented by Abu Garcia will also be a “double” points event for the Cabela’s School of the Year presented by Abu Garcia race. At this event, not only will each competing school’s top placing team get points, but the second highest placing team will also receive points as well. The Cabela’s School of the Year presented by Abu Garcia is one of the highest honors a school can win in collegiate fishing. This year the first place school will win over $11,000 in prizes.
The official practice for the Texas Collegiate Challenge presented by Abu Garcia begins on Friday, April 28th, and tournament will be on Sunday, April 30th, 2017. Launch and weigh-in will be held at High Port Marina starting at 3pm on Sunday.
For more information please visit: https://www.collegiatebasschampionship.com
https://www.collegiatebasschampionship.com/wp-content/uploads/2017/04/image018.jpg 552 919 Shelley https://www.collegiatebasschampionship.com/wp-content/uploads/2021/05/2019-BPS_CBFS_logo-300x179.png Shelley2017-04-10 12:27:392017-05-15 16:11:30Lake Preview: Lake Texoma
SPRO Continues Support for Cabela’s Collegiate Bass Fishing Series