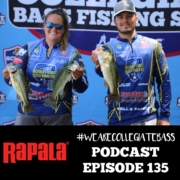 It’s time for another new episode of the Rapala #WeAreCollegiateBass Podcast!  On this week’s show, host Kyle Curry talks with Emily Freeman, Braiden Koerber, and Ryan Park from 6th ranked Murray State University.  Murray State has earned a total of 6,140 points this season, and trails top-ranked Adrian College by 1,200 points.  The team from near the shores of Kentucky Lake has a rich history as being a highly competitive club on the national scene.  However, one thing is still missing from the team’s trophy case…the Bass Pro Shops School of the Year presented by Abu Garcia.  Each of the past four years, Murray State has finished the season ranked inside of the Top 5 but has failed to be number one come season’s end.  Tune in to hear these anglers talk about this season and Murray State’s quest to win it all!