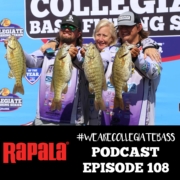 The final major ACA event before the year-end Championship was contested on Pickwick Lake in Florence, AL last weekend. James Willoughby and Chance Schwartz from number one ranked University of Montevallo won the 2021 Pickwick Slam with a two-day total of 45.42 pounds. The duo entered the final day with a slim lead over second-place and managed to weigh in another bag over 20 pounds on the final day to win by a margin of just over five pounds. Willoughby & Schwartz took home thousands of dollars in prizes and contingencies, as well as 1,000 points to count towards the Bass Pro Shops School of the Year presented by Abu Garcia. Tune in as they talk about the recent victory and Montevallo’s chase to be the top-ranked team in the nation at season’s end.