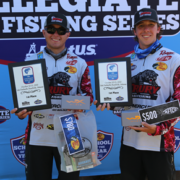 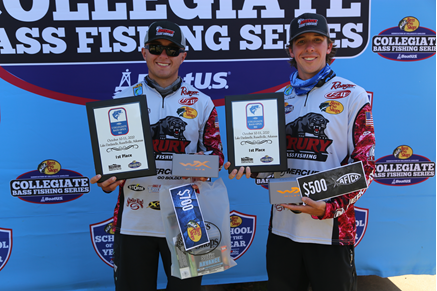 RUSSELLVILLE, AR (October 11, 2020) – The scales are closed here in Russellville, AR and the 2020 AFTCO Collegiate Bass Open at Lake Dardanelle is in the books.  150 collegiate teams took to the storied Arkansas River fishery with the hopes of finishing in the Top 20 and taking home their share of $20,000 in prizes & contingencies.  Day two of tournament action resulted in a lot of movement near the top of the leaderboard, but when the weights were finalized, Cole Breeden & Cameron Smith finished in first place.  The duo of anglers from 15th ranked Drury University weighed in a two-day total of 26.52 pounds to top the field and earn upwards of $5,000 in prizes & contingencies.

Breeden & Smith entered today with a nearly five-pound lead after weighing 19.90 pounds on day one.  They made the decision to return to the area that produced on Saturday in hopes of finding several more big bites.  “We definitely fished the same area.  We didn’t think there were a lot of fish, but we thought there was the better size that we had yesterday,” noted Breeden.  “We figured if we put ourselves in there all day, that we’d happen to run across a big one or two and we’d be good, but that just didn’t happen.”

After staying in that area all day today, the Drury University anglers only managed to land three keepers for a total of 6.62 pounds.  The bite in their key area was slow and methodical.  “Usually it was two or three flips in there, then they bit,” explained Smith.  Breeden & Smith worked a jig around shallow cover for both days of the tournament.  “Both of us were throwing a green pumpkin with a little bit of blue in it,” said Breeden.  That jig setup combined with a magical stretch of water proved to be the winning keys for Cole Breeden & Cameron Smith from Drury University.

Along with the $5,000 in prizes & contingencies that the pair wins for taking overall top prize, they also earn 1,000 points for Drury University towards the Bass Pro Shops School of the Year presented by Abu Garcia.  Drury entered this weekend ranked 15th overall out of more than 300 collegiate fishing teams in the nation.  One other team from Drury also managed a Top 5 finish at this week’s AFTCO Collegiate Bass Open.  Beau Browning & Brock Bila finished in fifth place for the weekend with 21.73 pounds.  Those two top five finishes will earn Drury more than 1,900 points towards their School of the Year total.  That should go a long way in helping the team from Springfield, MO move way up in the standings that will be revealed later this week. 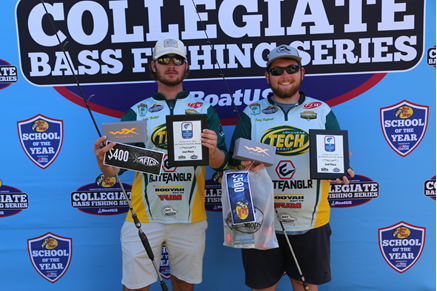 Finishing less than two pounds out of the top spot in second place were Matt Baker & Kory England from Arkansas Tech University.  The local team from here in Russellville weighed in just under 10 pounds on day two for a cumulative total of 24.88 pounds.  One of our camera crew members began the day with them, and though they got a lot of bites early, they just weren’t quite the right quality fish.  “It was different conditions 100% today,” noted Baker.  “We didn’t get the big bites we got yesterday.  We pulled up on the spot where we got all three of our big fish yesterday, and it was just short fish, short fish.  Finally caught a two pounder off of it.  I think we caught about 15 fish off of that one spot.”  Though they slipped ever so slightly on day two, a strong day one helped to bolster their weight total and claim them second place overall.

For their second place showing, Baker & England earn a $500 Bass Pro Shops gift card, two Denali Rods, a $400 AFTCO gift card, two Wiley X sunglasses, and a Rapala tackle package.  Second place also earns over 900 points towards the Bass Pro Shops School of the Year presented by Abu Garcia.  Like Drury, Arkansas Tech had two teams finish inside of the Top 10 at the AFTCO Open.  That will earn them a ton of valuable points towards their School of the Year points total. 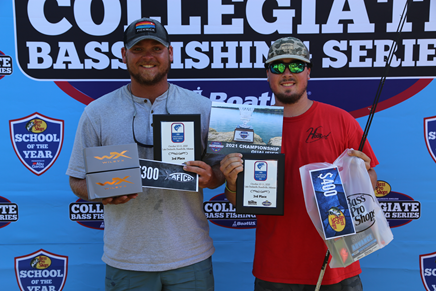 Rounding out the Top 3 are Sloan Pennington & Jacob Denton.  These two anglers amassed 24.65 pounds over the course of two days of competition.  This is the first time that these two anglers have fished Lake Dardanelle in the fall, but that did not hinder their ability to catch some quality fish.  They got bites on a variety of baits and changed up their game plan to find success.  Third place wins a $400 Bass Pro Shops Gift Card, 2 Denali rods, a $300 AFTCO gift card, 2 Wiley X sunglasses, and a Rapala tackle package.

The 2020 AFTCO Collegiate Bass Open on Lake Dardanelle proved to be a great second major event on the 2020-2021 Bass Pro Shops Collegiate Bass Fishing Series. Special thanks to Russellville Tourism & Visitors Center for hosting this event for the fifth year in a row, and also to the Lake Dardanelle State Park staff for their hospitality and fish care services.

Our staff will provide a more in-depth breakdown of this weekend’s festivities later in the week. That coverage will include a look at the winning pattern with Breeden & Smith from Drury University, as well as a podcast interview for the Rapala #WeAreCollegiateBass Podcast, and an update to the Bass Pro Shops School of the Year presented by Abu Garcia.  Stay tuned to our website and social media for more coverage!