Many anglers say that competing in a Big Bass event takes a combination of skill and luck, but for University of Tennessee Chattanooga’s Dillon Falardeau, extra help came from above to earn the angler third place overall in the 2016 Cabela’s Collegiate Big Bass Bash Presented by Berkley.

Starting the event off with less than desirable conditions, Falardeau was still able to find and catch some fish, but not the quality that would earn him a top spot at the Big Bass event. On Day 2, Falardea boated a 7.13lb bass, one of only two seven pounders of the whole event, that led him to a third place finish overall. Falardeau attributes his success to more than just having his lure in the right spot at the right time. 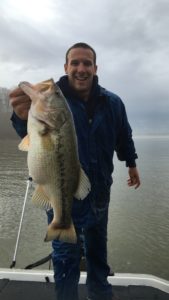 Falardeau’s only cousin and former fishing partner, Cory Gaudot, passed away from brain cancer when the two were eighteen years old. While on the water, Falardeau always has his cousin on his mind and Sunday was no different.

“We started on a point that was a big community hole. There’s always a bunch of fish and a bunch of competition. On Day 2 we had a low boat number so we ended up being the first ones there. We started fishing the point and caught one, but the point across just kept catching my eye. I just kept saying that I had a feeling,” said Falardeau.

“It’s going to sound weird, but I always follow blue herons when I’m fishing because number one, they always find the baitfish, but also because I just always think it’s Cory leading the way for me,” said Falardeau. “I saw a heron land on that point across from us and I knew that was my sign to go and so we moved over to that point so I made a long casts with the trap and the second cast, I caught that fish and looked up and thanked Cory. It was just such an awesome feeling.”

Half of the strategy behind fishing is being able to read the signs, such as water temp, clarity, mapping, and so on, but to Dillon Falardeau, a sign from his cousin Cory trumped any other signs that the angler could have noticed.

“It was such a long cast and the fish ate it almost instantly. It was really cool because everyone was cheering us on after the fish jumped a few times and we finally got it in the net. It was just such a crazy feeling and one I won’t ever forget,” added Falardeau.