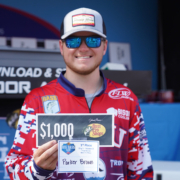 PARIS, TN (September 17, 2022) – Day 1 of tournament competition at the 2022 Bass Pro Shops Big Bass Bash presented by Berkley is in the books.  Close to 500 of college fishing’s top anglers took to Kentucky Lake bright and early this morning to compete for over $20,000 in prizes & contingencies and double points to count towards the Bass Pro Shops School of the Year presented by Abu Garcia.  Hundreds of quality bass crossed the scales at Paris Landing State Park, with Parker Brown from Dallas Baptist University weighing in the biggest bass of the day at 7.21 pounds.

Tournament competition kicked off bright and early this morning with Day 1 Session 1 presented by Engel Coolers.  Levi Mullins from Bethel University won the first session of the event with a largemouth bass weighing 5.40 pounds.  Levi received a $300 Bass Pro Shops gift card and an Engel 45 QT. cooler for the session victory.  His fellow teammate, Gage Sherrod, finished in second place for Session 1.  Gage earned a $100 Bass Pro Shops Gift Card, T-H Marine Keel Shield, and an Engel 45 QT. cooler.  Bethel University set the tone early securing what could be very valuable points to count towards the Bass Pro Shops School of the Year presented by Abu Garcia, points that could help the past title winner climb into the Top 25 this season. 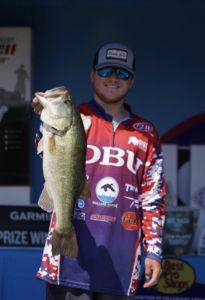 Session 3 presented by Bass Pro Shops.  Parker Brown weighed in a Kentucky Lake stud tipping the scales at 7.21 pounds.  Parker bested second place in the session by more than three pounds.  The 7.21 pound giant won Parker a $1,000 Bass Pro Shops gift card, and could pay out even more tomorrow if that overall leading weight holds up.  In Session 3 presented by HydroWave, Clay Oberman from Campbellsville University claimed second place with a bass weighing 4.00 pounds.  Along with the prizes awarded to that place, Clay earned an additional $150 Bass Pro Shops gift card by hitting one of the exact weight prizes.

In the final session of the day, Session 4 presented by Garmin, Travis Ely from Purdue University brought in a bass weighing 5.20 pounds to claim the session victory.  First place in Session 4 won a $1,500 Garmin credit and a $200 Bass Pro Shops gift card.  The second biggest bass of the final session also earned a Garmin credit.  Rob Lindsey from Bryan College weighed in a bass at 4.59 pounds to claim second.  That bass was worth a $1,000 Garmin credit and $150 Bass Pro Shops gift card.

Day 2 of the Bass Pro Shops Big Bass Bash presented by Berkley will begin at 6:45 AM tomorrow morning with official takeoff.  There will be a total of three weigh-in sessions on the final day.  The closing times for each session are; 9:30 AM, 11:30 AM, and 1:30 PM.  The first two sessions will pay out the Top 10 biggest fish, and the final session will award prizes to the Top 20.  Tune in to Outdoor Action TV to catch all of the live weigh-in coverage streaming for free!