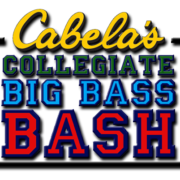 Kentucky Lake is rich in fishing and tournament history, and this weekend it’ll serve as the host for the Cabela’s Big Bass Bash presented by Berkley.  It will also be the first of four double point events for the Cabela’s School of the Year race, which is widely regarded as the top prize for college teams in the nation.
With fishing expected to be on fire this weekend at Kentucky Lake, we asked several college anglers fishing this one of a kind event what to expect this week.
Benjamin Wall of the number 1 ranked Cabela’s School of the Year, Auburn University Fishing Team:
When asked about the lake Benjamin said, “Kentucky Lake is just an awesome fishery that can really put out some giant fish, not to mention the fact that we are fishing the lake right around the pre-spawn/ spawn. I wouldn’t be surprised if we saw an eight to ten-pound fish win this event. What’s great about this lake is there’s a potential to catch a giant on any cast.
When asked about how his team will target bigger bites he said, “Depending on water temperature and water level we plan to target pre-spawn fish. We will be looking for main lake/ secondary gravel points adjacent to channel swings. We are basically trying to find those key ‘staging” areas leading into the backs of spawning bays, where those big females will stop before they pull up to spawn.    I expect to see medium-diving crankbaits along with heavy Football jigs or Carolina rigs produce some big bites this week. If the water were to come up and flood the bushes, I could see a lot of teams resort to flipping and pitching around all the shallow water cover.”
Thomas Tucker of the number 23 ranked Cabela’s School of the Year, Arkansas Tech University:
When asked about his prediction on what it will take to win, Thomas stated, “We figure that the overall big fish for the Big Bass Bash will be around 8-8.5lbs. As far as how we are going to target bigger bites, we are just going to go fish and see what happens.”   Thomas also said that he expects a lot of good fish will win prizes that are caught on swimbaits and jigs.
Ryan Lancaster of the number 22 ranked Cabela’s School of the year, Murray State Bass Club:
When asked about his prediction of what it would take to win, Ryan said, “The winning weight of the Cabela’s Collegiate Big Bass Bash will be 8lbs 7oz. There have been a lot of big fish caught in the past couple of weeks on Kentucky Lake with the water temperatures on the rise. Last year the Big Bass Bash took 8lbs to win and I believe this year will take at least that much, with the possibility of a 9lb bass claiming the title.
Lancaster continued saying, “With the Big Bass Bash being strictly a big fish tournament, our team is planning on adjusting our lure selection accordingly. The water temperatures on Kentucky Lake are a lot warmer than expected for this time of year, as there are some fish being caught on crankbaits and jigs. We plan to increase the size of our lures to target strictly big fish during this tournament.”
“Our team is very excited for this upcoming tournament and look forward to fishing our home lake with many other universities in hopes of landing a big bass.”  Ryan wrapped up his comments about the event saying, “We’re all extremely excited to get the year kicked off in Paris, TN on our home lake and see what weights are brought to the scale”.
Collegiate fishing fans, family members, and friends of competitors can  follow the action by visiting CollegiateBassChampionship.com and  Facebook.com/CollegiateBassChampionship. Televised coverage will be seen on NBC Sports Outdoors and the Pursuit Channel and other networks.

Weather and Prizes Will Be A Big Part Of 2017 Cabela’s Collegiate Big Bass...
Scroll to top