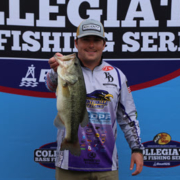 Dodson leads with 5.75 pounds, numerous fish over the four pound mark cross the scales on Day 1

Paris, TN (March 13, 2021) – Kentucky Lake shined on Day 1 of the 2021 Bass Pro Shops Big Bass Bash presented by Berkley. Bright and early this morning, close to 400 of the top collegiate anglers launched from Paris Landing State Park to compete in this no entry fee event with a prize payout valued at over $40,000. It became evident early on this morning that it was going to take a good quality fish to claim one of the 40 prizes up for grabs today. Cole Dodson from number one ranked University of Montevallo set the bar on Day 1 by winning Session 4 presented by Garmin, and taking the overall tournament lead with 5.75 pounds.

The morning started off with overcast skies and a light rain falling across Henry County and Paris, TN. Numerous teams amongst the field were able to figure out how to get those Kentucky Lake fish to bite during the rainy conditions. As the afternoon wore on, the skies began to clear and the rain stopped. This presented another bite window for anglers to capitalize on, and teams that struggled during the morning adjusted to get better bites throughout the afternoon.

Nate Pardo from Indiana University kicked off the morning by winning Day 1 Session 1 presented by Engel Coolers with 5.25 pounds. That five plus pound fish bested second place by almost half a pound. Pardo earned a $500 Bass Pro Shops gift card and an Engel 50 cooler for the session victory.

Murray State University enters this event ranked in the Top 10 for the Bass Pro Shops School of the Year presented by Abu Garcia and defending champions of this event from 2020. Murray State angler, Harbor Lovin, represented on his home waters by weighing in a largemouth bass weighing 4.85 pounds to claim the win in Day 1 Session 2 presented by HydroWave. First place for this session earns a HydroWave H2, a T-H Marine prize package, as well as a $300 Bass Pro Shops gift card.

Session 3 presented by Bass Pro Shops proved to be the most competitive session of the day as first and 10th place were separated by just over half a pound. Wil Rigdon from Campbellsville University brought in a smallmouth bass weighing 4.25 pounds to win a $1,000 Bass Pro Shops gift card. This fish from Rigdon ended up being one of the largest smallmouth brought to the scales on Day 1 of the Bass Pro Shops Big Bass Bash presented by Berkley.

The race for Bass Pro Shops School of the Year presented by Abu Garcia is taking center stage this week as teams compete for double points at the second to last ACA ran event before the Championship. Cole Dodson held up his end of the bargain for top ranked Montevallo by weighing in the biggest fish of the event with a 5.75 pound largemouth bass and took top honors in Session 4 presented by Garmin. That fish will definitely ensure that Montevallo is represented well in the final standings. Dodson earned a $1,500 Garmin Panoptix LiveScope system and a $200 Bass Pro Shops gift for the session victory.

Day 2 of the Bass Pro Shops Big Bass Bash presented by Berkley will begin at 7:30 AM tomorrow morning with a total of three weigh-in sessions scheduled at 9:30 AM, 11:30 AM, and 1:30 PM. Anglers will be permitted to use only Berkley baits tomorrow. Tune in to the Outdoor Action TV app starting around 8:30 AM to catch all of the live weigh-in action.