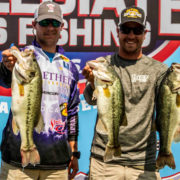 FLORENCE, Ala. (5/24/2018) – The scales have closed and the crowds have cleared out at McFarland Park as Day 1 of the 2018 BoatUS Collegiate Bass Fishing Championship presented by Cabela’s is in the books.  330 of college fishing’s finest anglers took to Pickwick and Wilson Lake looking to bring their best five fish to the scales.  The field of collegiate competitors were anxious and ready to go in search of feeding fish out on the famed ledges of the Tennessee River system.

Throughout the spring, Pickwick Lake has been producing limits and limits of quality fish.  On average, a five fish limit weighing 20 plus pounds has been needed to win, or even in some cases cash a check.  Because of this, the anticipation for this event was high.  Everyone was looking forward to see just how good the weights would be on Day 1.

Today anglers were greeted with rather tough conditions.  The sun was high in the sky with minimal cloud cover, winds were obsolete, and the current flow was barely noticeable.  In the game of ledge fishing, these are not textbook circumstances.

Early in the morning, reports from on the water began rolling in quickly.  Fish in the 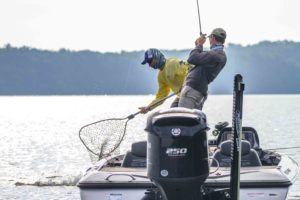 two to three pound range were being caught left and right.  Most of the field started out deep, focusing on the ledges with a variety of baits.  Though it seemed like bites were easy to come by with anglers catching fish every cast, this was not the case.  Bites would come in flurries.  A team may go two to three hours without a bite, and in 15 minutes they would catch their limit and turn the whole day around in a matter of casts.

More of the same continued on into the afternoon.  Reports of consecutive fish catches decreased, but the better sized fish began to show up.  By the end of the day, most anglers had thrown just about every bait in their tackle box.  Patterning the bass on both Pickwick and Wilson Lake was seemingly impossible.  From crankbaits, to swimbaits, finesse worms, and even hair jigs, fish were caught on a variety of baits. 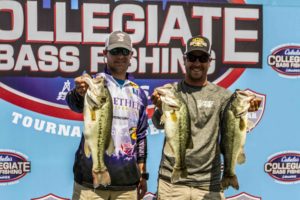 One team that was able to break this trend and dial the fish in on one specific bait was the Bethel University team of Carter McNeil and Cole Floyd.  Throwing a crankbait on offshore structure, they got to work early this morning says Floyd, “We pulled up there, we threw a crankbait, we caught like 30 in a row.  It was every single cast, and we had 18 pounds in about 15 minutes.” After running around and hitting a few more spots, Floyd and McNeil upgraded their bag to weigh-in 22.63 pounds.  This five fish total was good enough to claim the day one lead by .03 pounds over second. 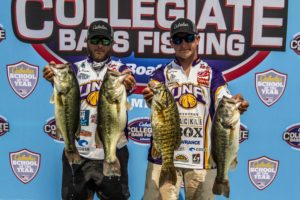 The team sitting in second trailing by that slim margin is Triston Crowder and Lake Blasingame.  Representing the University of North Alabama, this local team weighed in five fish for 22.60 pounds.   Blasingame is pumped up about their Day 1 catch, “It feels really good, we caught a bunch of fish, a bunch of 12 inchers and then finally we got the big ones to start biting.  It’s not easy, but it definitely feels good.”  The UNA duo also caught all of their fish in a quick flurry.  Heading into day 2, Blasingame is optimistic about their chances to duplicate this Day 1 performance.

For a look at the complete standings from Day 1 click here.

Not only will competitors be looking to climb to the top of the leader board on Day 2, some schools will be focused on winning the 2018 Cabela’s School of the Year (SOY) presented by Abu Garcia.  The school sitting high atop these standings, leading into the final day of the SOY season before a champion is crowned, is Bethel University.  With two teams in the top five after Day 1 here at the Championship, it is all but a formality for Bethel to take home the title.  Day 1 leader Cole Floyd knows the importance of this opportunity for his school, “It’s a really neat deal.  We have a lot of good guys on our team.”  The winner of the Cabela’s School of the Year presented by Abu Garcia will be announced after the conclusion of tomorrow’s weigh-in.

Another story line entering tomorrow will be the weather.  Forecasts call for a 90% chance of thunderstorms in the morning and becoming more widespread throughout the afternoon.  This will definitely be something to keep an eye on.  Rain and storms could also slow down coverage on the live blog, but we will be up and at it bright and early in the morning covering the day’s events.  Be sure to check in beginning around 5:00 am for Day 2 coverage of the 2018 BoatUS Collegiate Bass Fishing Championship presented by Cabela’s.