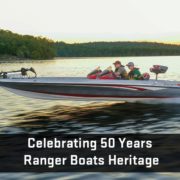 Celebrating its 50th Anniversary in 2018, the beginnings of Ranger Boats can be traced all the way back to 1968 with founders Forrest and Nina Wood.

After building the original (6) boats in what is now the City Hall in downtown Flippin, Arkansas, the business grew quickly and soon became a household name among fishermen across the country. Early Ranger industry innovations included: the use of heavy, 6-gauge wiring for more efficient trolling motor operation; the first to use fiberglass seat components for greater durability; first to develop and use matching fiberglass trailer fenders; first to use a computerized spin balancing and laser axle alignment machine on trailers; first to introduce disc brakes on trailers; introduced resin transfer molding for boat parts; first to use environmentally friendly zero ozone depletion flotation foam; first to feature newly designed hydraulic steering as standard equipment on models equipped with V6 engines; first to use closed cavity bag molding. 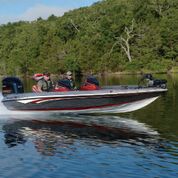 Early on, Ranger also led the way to new U.S. Coast Guard flotation standards with the use of additional safety foam flotation material. Ranger also patented the aerated livewell for keeping fish alive for release following a tournament. Catch and live release, enabled by the aerated livewell from Ranger, has been one of the industry’s most obvious conservation efforts.

Ranger also discovered very early that most boats spend more time on their trailers than in the water. Experience proved that ill-fitting boat trailers actually damage a boat’s hull and running surfaces over time. For that reason, Ranger builds their own custom boat trailers…RangerTrail® trailers…each precisely fitted to protect the hull they are carrying and matched to that boat in color and styling. 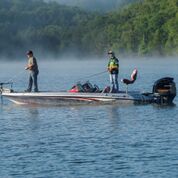 During the mid-1970’s, Ranger also began building boats for walleye, salmon, and musky anglers. Traditionally an arena populated by aluminum boats, the Ranger Fisherman Series has become the boat of choice with knowledgeable, big-water anglers. A premium line of Saltwater flats, bay and intracoastal boats are also among the well-established and strongly recognized products available.