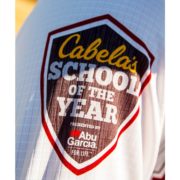 Bethel Continues to Hold on to 1st as Auburn makes a move into 2nd, and UNA in 3rd

The Association of Collegiate Anglers (ACA) and Cabela’s Collegiate Bass Fishing Series have released the latest Cabela’s School of the Year presented by Abu Garcia rankings update for the 2017-2018 season. With the season winding down to one final double points event, there is little doubt that the 2018 BoatUS Collegiate Bass Fishing Championship will be the most pivotal event of the year in determining who will reign as this year’s Cabela’s School of the Year winner, as well as all the schools that end ranked in the Top 25 for the year – which is no easy feat anymore in college fishing.

The current update released today shows a move within the Top 5 schools for several top bass fishing school teams.    Leading off the rankings and continuing the strangle hold they’ve had all year long on 1st place is Bethel University.   Their almost magical run as the nation’s number one team has continued all season long.  Bethel’s dominance this season has left many to say it is almost a foregone conclusion that they will win School of the Year unless something unforeseen happens at the season ending Championship. While many are already congratulating the Bethel team, the chase is still on for which teams will occupy the rest of the Top 5 spots in the nation, and win the prizes associated with those spots, as well as which teams will end the year ranked inside the Top 25.

“Bethel University’s season has been one to watch and marvel at this season.  What has  been most impressive to me is the amount of anglers that have earned points for the Bethel team at events all over the nation this season.    This dominance hasn’t been seen in college fishing to date and may not be seen again like this for some time,” said Wade Middleton, Director of the ACA.

When it comes to teams vying for Top 5 and Top 25 places in the Cabela’s School of Year presented by Abu Garcia race, remember that the Championship awards more points than any other event on the schedule, so we should expect to see a lot of rankings shake ups.  With only this one key event left this season with the opportunity to earn points, there are a few key observations to keep in mind going into the Championship.

Auburn University went head to head with Bethel University and University of North Alabama at last week’s B.A.S.S Eastern Tour event on Lake Cherokee and placed 6th to collect 150 points, thus helping them move into the 2nd place spot. Auburn has been in the hunt for the Cabela’s School of the Year title and will surely be making a run for the BoatUS Collegiate Bass Fishing Championship title next week to help solidify their ranking and be there just in case Bethel does stumble.

Two-time Cabela’s School of the Year winners, University of North Alabama, are in 3rd place and definitely looking to make a push for a top ranking. UNA will be a big presence next week as they defend their BoatUS Collegiate Bass Fishing Championship title while fishing on their home waters of Pickwick Lake.   With the points awarded, it’s not out of the question for UNA to place two teams in the top ten this week, thus earning a large amount of points in case Bethel does fall short.

Murray State University slips into 4th place after sitting in 2nd place in the last Cabela’s School of the Year update. Murray State is a perennial bass fishing powerhouse and is riding a wave of recent successes as they are coming off a major win at the FLW Central event back in April.  There is no doubt they are looking to hold on to a top ranking once again as the season winds down.

McKendree University, currently in 5th place, has been steady all year long in major events and looking for a top finish next week to keep them in the Top 5.    McKendree is also a team that has often been ranked in the Top 10 in the nation and outsiders see this as another great year for their team which has become one of the top programs in the nation.

Other teams looking to wrap up a great year and move into the Top 5 in the nation are Adrian College sitting in 6th place, which is the highest ranked team from the northern states this season; as well as the 7th place Bryan College team.  Bryan College won the 2017 Cabela’s School of Year race and has been a highly ranked team throughout this season.

There are only two events left that count towards Cabela’s School of the Year standings – B.A.S.S Western Tour which shouldn’t have any impact on the Top 25 rankings and the long awaited BoatUS Collegiate Bass Fishing Championship presented by Cabela’s. The 2018 Championship on Lake Pickwick will feature 22 out of the top 25 ranked universities/colleges in the nation and with each university/college’s top 2 highest finishing teams earning points towards the final Cabela’s School of the Year standings, it will be interesting to see what the final rankings will be. You can follow all the action of the 2018 BoatUS Collegiate Bass Fishing Championship next week with our Live Coverage.