Most collegiate anglers know that fishing tournaments means being willing to travel. For some, traveling is considered an hour, but for others like the Michigan State Bass Team, it’s a little closer to nine hours.

In order to compete in the 2015 Cabela’s Collegiate Big Bass Bash Presented by Berkley, Michigan State Bass Fishing Team member Ross Parsons and the rest of the Michigan State team made the trek down to Kentucky Lake for their chance at cashing in on over $25,000 in cash and prizes.

“We drove from Michigan State, which is about an eight and a half hour drive, for our week of spring break,” said Parsons. “Coming from the north, we know that northern lakes are completely different than southern fisheries and it’s a great experience to fish in legendary waters like Kentucky Lake for such a great event.”

Parson added that there was an additional reason why the team was eager to make the trip from the frigid temperatures of Michigan.

“It’s great to get away from the northern fisheries sometimes, especially around this time of year because some of our lakes are still frozen over,” said Parsons. “But also, in our fisheries, a six pounder is huge. When we get to go to lakes like Kentucky Lake, we have the chance to catch fish ten pounds and up!”

Parsons won the Session 4 of Day 2 in last year’s Cabela’s Collegiate Big Bass Bash Presented by Berkley and was able to cash in on his 6.08 pound bass and looks to repeat in this year’s event as well.

“The cool thing about the ACA and the Big Bass Bash is that you’re never out of the picture to win,” said Parsons. “We had no previous experience on the lake but my partner and I each caught two good fish on camera and we were able to cash those fish in which really was the icing on the cake to make the whole trip an awesome experience.” 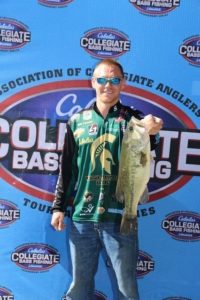 Though Parsons graduated this past December, he still plans on one last spring break spent with the Michigan State Bass Fishing Team at the Cabela’s Collegiate Big Bass Bash Presented by Berkley.

“We make a weeklong trip so we get to hang out with our team and other anglers for our whole spring break and that’s what we want to do this year too. The community as a whole is so welcoming to all fishermen and it’s a great experience on and off the water,” Parsons added. “Everyone appreciates you traveling down and spending your time in Paris and I’m looking forward to coming down in March and cashing in on more big fish,” stated Parsons.

https://www.collegiatebasschampionship.com/wp-content/uploads/2016/11/Collegiate_Bass_Fishing_Championship-squarelogo.jpg 200 200 Shelley https://www.collegiatebasschampionship.com/wp-content/uploads/2021/05/2019-BPS_CBFS_logo-300x179.png Shelley2016-02-17 20:03:082016-12-02 20:10:06Traveling Down to the Cabela’s Collegiate Big Bass Bash Presented by Berkley
The University of North Alabama Knows the Importance of the Cabela’s Collegiate...