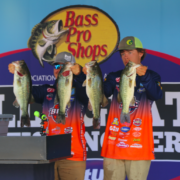 LAKE MURRAY, SC (May 26, 2021) – Day 1 competition for the 2021 BoatUS Collegiate Bass Fishing Championship presented by Bass Pro Shops is in the books as the scales have closed at Dreher Island State Park.  Corey Yaden and Blake Stephenson from 12th ranked Brewton-Parker College stake claim to the Day 1 lead with 17.64 pounds.  Local collegiate anglers Tim Richardson and Gerard Kelly from nearby Newberry College sit in second overall with 16.49 pounds, and the Kansas State pairing of Austin Wiley and Sam Kennedy complete the Top 3 with 16.01 pounds.

The 2021 BoatUS Collegiate Bass Fishing Championship presented by Bass Pro Shops is the 16th edition of college fishing’s longest-running National Championship event.  Lake Murray is playing host to the tournament waters for this week’s event for the first time ever and the lake showed out on Day 1 of competition.  The team that cracked the code the best was the two angler pairing of Corey Yaden and Blake Stephenson from Brewton-Parker College.  Yaden and Stephenson brought in a five bass limit weighing 17.64 pounds to jump out to a one pound plus lead over second.  They were tight lipped about their pattern and will disclose what worked and what didn’t live tomorrow during the weigh-in.

Trailing close behind in second place are Tim Richardson and Gerard Kelly from Newberry College.  The pair of freshman anglers recently started the bass club at Newberry College and used their knowledge of Lake Murray to cover a lot of water to catch 16.49 pounds.   Trailing less than a half pound behind them in third place are Austin Wiley and Sam Kennedy from Kansas State University.  This pair of anglers is hopeful they can repeat their day 1 success.   Each of the Top 3 teams all eclipsed the 16 pound mark and caught their weight in a variety of manners.  The race to crown a National Champion tomorrow should be a good one, as first through 10th place are separated by just three and a half pounds with several nationally ranked schools within striking distance.

Another title that will be crowned tomorrow is the 2020-21 Bass Pro Shops School of the Year presented by Abu Garcia.  The University of Montevallo entered this event with a commanding lead and put its best effort forward on Day 1 to ensure the team hoists the School of the Year trophy tomorrow afternoon at the conclusion of the event.  Montevallo’s highest two placing teams at the moment are in 5th and 6th place overall.  If those two teams hold on to Top 10 spots following Day 2 of competition, Montevallo could very well run away with the School of the Year title.

The other race to watch revolves around the third place overall spot in the rankings.  Murray State holds possession to this spot at the moment, but 5th ranked Carson-Newman University is charging hard to earn a top three ranking and the highest-finish in school history.  Carson-Newman currently has two teams in the Top 10 and stands to earn well over 2,000 points if they can continue their success on Day 2.

Tomorrow will be the final day of the BoatUS Collegiate Bass Fishing Championship presented by Bass Pro Shops and the culmination of the 2020-21 Bass Pro Shops School of the Year presented by Abu Garcia.  Tournament coverage will begin tomorrow morning with the live blog, followed by streaming of the launch, and then the weigh-in later in the afternoon.  Be sure to follow along with all of the action via our website, social media pages, and the Outdoor Action TV app.