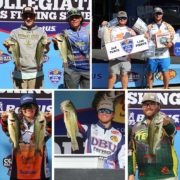 SAN ANTONIO, TX (January 6, 2022) – In today’s feature, we will be highlighting teams ranked 6th – 10th in the Bass Pro Shops School of the Year presented by Abu Garcia.

Knocking on the door of the Top 5, ranked 6th overall, is Murray State University.  Living up to its Top 10 pre-season ranking, Murray State has gained over 6,200 points this season. 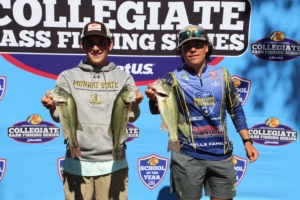 Murray State is one of several top collegiate bass fishing teams that has been in contention but never won the Bass Pro Shops School of the Year presented by Abu Garcia.  Going into the 2021-22 season, the team’s goal was to win it all and nobody would be surprised if they did.  “Our overarching goal is to win School of the Year, and we are hungrier than ever for it. We feel as if we need redemption from the past few years, being so close to that number one spot. Our plan is to be more consistent, as last year we struggled with that. We would have a super high finish in one tournament, and then low at the next. We also plan to perform with more consistency at the double points events. Those are crucial in the School of the Year race, and last year we did not take full advantage of those tournaments.”

Murray State finished the 2021 season ranked 5th, making that eight out of the past nine seasons in which Murray has finished in the Top 5 for the Bass Pro Shops School of the Year presented by Abu Garcia.

Sitting at 6th overall with 6,200 points, less than 1,300 points behind 1st place, Murray State is definitely within striking distance entering the spring season.

Each of the three remaining ACA double points events set up well for Murray State to go out and have strong showings.  The 2022 Bass Pro Shops Big Bass Bash presented by Berkley is set to be contested at Kentucky Lake, just a short drive away from the Murray State campus.  And the final event of the year, the BoatUS Collegiate Bass Fishing Championship presented by Bass Pro Shops, will be held at Pickwick Lake, which is not too far from Murray State as well.

Murray State possesses the potential to make a legitimate run at claiming the team’s first ever title as Bass Pro Shops School of the Year presented by Abu Garcia this season. 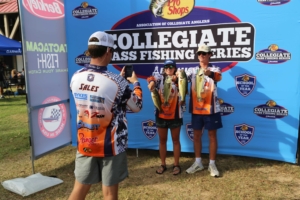 Carson-Newman has put together a great season to this point.  The team’s resume consists of numerous Top 10’s at major national level events, including a win at the MLF Southeastern regional, as well as several victories worth 100 points each at School-Run/Other sanctioned events.

The lone major speed bump for Carson-Newman came at the AFTCO Collegiate Bass Open on Lake Dardanelle.  The two points earning teams at this ACA double points event finished in 41st and 50th overall.  Two Top 50 finishes tallied a total of 1,610 points.  Several teams ahead of Carson-Newman in the standings earned over 2,000 points that weekend.

However, for Carson-Newman, the first event of the spring semester can’t get here soon enough.  This weekend, on January 7th, is the first MLF Southeastern Regional of 2022.  Very valuable points will be up for grabs, and only two to three teams in front of Carson-Newman in the rankings will be eligible to earn points.  That means that when the next updated points standings are dropped, Carson-Newman could be ranked as high as 6th overall.  Though that is only one position jump up, it would also bring the remainder of the Top 5 closer within reach as the spring season picks up.

Dallas Baptist University is currently ranked 8th in the Bass Pro Shops School of the Year presented by Abu Garcia with 5,325 points.  Picked to finish 12th following the pre-season 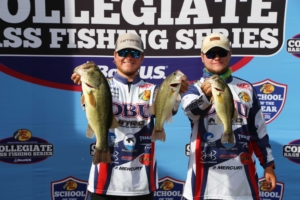 rankings, DBU is exceeding the expectations of media members and the college fishing community.

Two Top 10 finishes at MLF Regionals and double points earned at the AFTCO Collegiate Bass Open are fueling DBU’s run to the Top 10 this year. 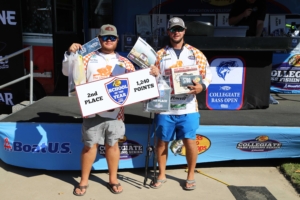 “It means a lot to us as a team to be viewed as one of the best 25 teams in the country. This is something we strive for each year,” said Teddy Peznola, University of Tennessee angler, entering the 2021-22 season.  “We have put together a good group of guys who compete at each event and we’re proud of our successes recently. We have seen a huge growth in the interest in our team with new students joining and our growing fan base.”

The above quote was the sentiment shared among the University of Tennessee bass fishing club prior to the beginning of this season.  Six months into this run, one would have to figure that Tennessee is fairly pleased with the team’s performance.  Tennessee is ranked 9th overall with 5,120 points, exceeding pre-season expectations by exactly five spots.

Tennessee is a force to be reckoned with.  The club puts together a great team each year, and this season they are poised to make program history as it pertains to the Bass Pro Shops School of the Year presented by Abu Garcia.

“Our goal for this upcoming season is a top 5 finish in School of the Year. We have made a lot of adjustments over the summer to how we will operate as a club at the University,” added Peznola.  “As a team, we have become a close group of friends…and all want to see our team be more successful than ever.” 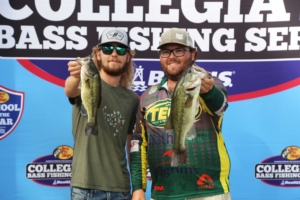 Rounding out the Top 10 is Arkansas Tech University.  The team from Russellville, AR checks in at 10th with 5,065 points.  The team’s current ranking is 11 spots better than the 21st ranking placed upon them from the ACA pre-season poll.

ATU won the first ever Bass Pro Shops School of the Year presented by Abu Garcia back in 2012.  Since then, the team has remained a force to be reckoned with out on the national circuit.  Coming off of a 18th place finish in 2021, Arkansas Tech is building towards another magical run this year with sights set on winning it all.

Take a look at this resume from Arkansas Tech in the fall of 2021:

Arkansas Tech understands the praise and prestige that comes with being relevant at the national level.  “It says a lot about our program! We have worked hard the last few years to send teams across the country to compete in as many tournaments as possible! To have members of the college fishing community identify our program as one of the best in the country means we are doing something right,” noted Tristan Weaver, Vice President of the Arkansas Tech University Bass Fishing Club.

A flurry of good events throughout the spring could be enough to put Arkansas Tech amongst the Top 5 and threatening to claim the school’s second-ever Bass Pro Shops School of the Year presented by Abu Garcia.

Unveiling the Current Top 5 in the Bass Pro Shops School of the Year presented...
Scroll to top