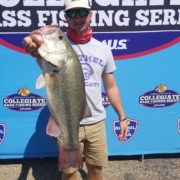 PARIS, TN (September 19, 2020) – Day 1 of the 2020 Bass Pro Shops Big Bass Bash presented by Berkley saw a ton of fish brought to the scales at Paris Landing State Park on the shores of Kentucky Lake.  The action started fast and furious immediately following take off and lasted until the scales closed at 3:00 PM for the end of Session 4 presented by Garmin.  Kentucky Lake kicked out boat loads of fish in the 2.5 – 4 pound class range to jumpstart the Association of Collegiate Anglers’ first major event of the season.  Anglers caught fish on a variety of baits, securing valuable points towards the Bass Pro Shops School of the Year presented by Abu Garcia and cashing in on tens of thousands in prizes.

Bailey Bleser started the morning by winning Session 1 presented by Wiley X with a largemouth bass weighing 4.55 pounds.  “My emotions when catching the fish was, honestly, mostly shock and nerves as it literally ate my bait at my feet,” explained Bleser. “Once it was in the net it was all high fives and laughs. We knew it was a Kentucky lake giant.”  That Kentucky Lake giant netted the McKendree University angler a $300 Bass Pro Shops gift card and a pair of Wiley X ‘Captivate’ sunglasses.

Here is how the Top 10 shook out for Session 1 presented by Wiley X:

The fist two hour period of the day saw a flurry of fish come to the scales.  Many of the anglers reported taking advantage of the morning bite with a variety of topwater lures.  “I caught the fish on a black Berkley Choppo. We were fishing some big chunk rock that was slightly wind blown.  The fish actually hit the bait at my feet and jumped several times right at the boat,” Bleser added.  Look for the Berkley Choppo to be a big player tomorrow as anglers are permitted to use only Berkley products on the final day of competition.

Next up was Session 2 presented by HydroWave.  Griffin Fernandes from Adrian College took the session victory with a bass weighing 3.96 pounds.  Fishing a Secret Lures Big Dummy Stupid Tube along a riprap bank, Fernandes set into a prize winning fish.  “We just stayed here close by the ramp for most of the day.  The fish bit along the highway bridge about midmorning,” said Fernandes.

As a result of winning Session 2, Fernandes receives a HydroWave H2 and a $300 Bass Pro Shops gift card.  Along with those prizes, he also positions himself in a good position to earn valuable points for Top 10 ranked Adrian College towards the Bass Pro Shops School of the Year presented by Abu Garcia.

One of the busier sessions of the day was Session 3 presented by Bass Pro Shops.  There were a total of four fish weighed in over four pounds, with 10th place taking a 2.69 pound fish to claim a prize.

Bethel University angler Hunter Fillmore takes home top prize for the hour, a $1,000 Bass Pro Shops gift card, with a 4.87 pound fish.  “That fish bit on a jig with a Berkley trailer around some brush just before the end of the 1:00 PM session,” noted Fillmore.  This was one of the first times a jig was mentioned by the anglers competing in the tournament.  During the fall time, a jig can prove to be a big fish catching machine.  Fillmore proved that theory to be correct as that was the winning bait for Session 3 presented by Bass Pro Shops, and currently has him as the overall leader of the event going into the final day.

Topwater proved to be the winning bait again in Session 4 presented by Garmin.  Levi Mullins from Bethel University took top honors in the final session of the day with a 4.82 pound largemouth that he caught on a Berkley topwater bait.  “We were targeting shad in a pocket,” he explained.  “That fish came up and ate a Berkley HighJacker.”  The HighJacker is a walking style topwater bait from Berkley.  Fillmore cashed in on the final session as he earned a Garmin Panoptix LiveScope System and a $200 Bass Pro Shops Gift Card.  A prize total valued at $1,700.

Tomorrow will be the final day of competition for the 2020 Bass Pro Shops Big Bass Bash presented by Berkley.  Anglers will be required to use only Berkley baits and products during competition.  This will create a great deal of excitement and buzz on Day 2.  Be sure to tune in to the live blog and the digital stream on Outdoor Action TV to keep up with all of the happenings out on Kentucky Lake tomorrow.