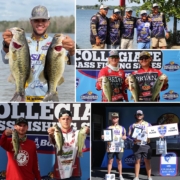 SAN ANTONIO, TX (January 3, 2022) – With the calendar now turning over to 2022, the race for Bass Pro Shops School of the Year presented by Abu Garcia is entering the second half of the 2021-2022 chase to be the number one ranked team in all of collegiate bass fishing.  Throughout the course of this week, the Association of Collegiate Anglers is going to reveal the teams currently ranked 1st-25th.

Each day we will highlight five teams, providing a glimpse at their season thus far and comparing each school’s ranking in the ACA Pre-Season Poll to where they stand presently.  The reveal will culminate with teams 1st through 5th being announced on Friday, along with a link to view the complete rankings of the top collegiate teams in the nation.

In today’s feature, we will be highlighting teams ranked 21st-25th. 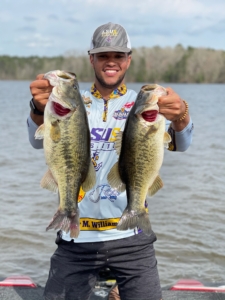 Louisiana State University-Shreveport currently checks in at 21st overall in the Bass Pro Shops School of the Year presented by Abu Garcia.  Located in Shreveport, LA, LSUS has earned a total of 3,205 points this season.  The team’s best finish of the year, to this point, came at the MLF Southern Regional on Lake O’ the Pines back in June.  Tyler Tamburo and Blakely Young finished in 4th with a five fish limit weighing 24 pounds.  That Top 5 finish earned LSUS a total of 970 points.

Representatives from Louisiana State University-Shreveport made the trip to Russellville, AR in October of last year to compete in the ACA ran AFTCO Collegiate Bass Open.  The team managed to earn a total of 930 points at that event, which has helped them to sustain a Top 25 ranking in the Bass Pro Shops School of the Year presented by Abu Garcia.

Following the event at Lake Dardanelle, LSUS was featured in an episode of the Rapala #WeAreCollegiateBass Podcast.  Host Kyle Curry was joined by Head Coach Charles Thompson, as well as team members Tripp Bowman and Brayden Nichols.  Click here to listen to the full podcast episode.

Coach Thompson and the team at LSUS are working hard to put together a group that can compete at a high level both now and for years to come.

“Whether I win, Tripp wins, it doesn’t matter who wins…if somebody places good, that’s all we care about,” explained Brayden Nichols, LSUS team member.  “I really think as a team, we’re very well-rounded, and it’s really going to show in the next few years as we grow stronger and stronger.”

Bethel University checks in at 22nd currently and is one of the biggest surprises following an initial pre-season ranking of 6th.  To this point in the season, Bethel has earned a total of 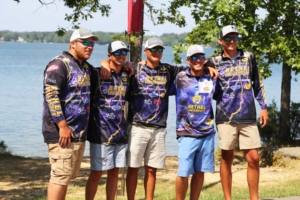 Bethel University is widely considered on the of the powerhouses in collegiate bass fishing, and the stats are there to support this high praise.  Bethel won the 2018 Bass Pro Shops School of the Year presented by Abu Garcia and has claimed top honors at the BoatUS Collegiate Bass Fishing Championship presented by Bass Pro Shops three separate times (2013, 2018, 2019).

Numerous alumni from this program have gone on to compete at the highest levels in the sport.  That list includes names like Cody Huff, KJ Queen, John Garrett, and Cole Floyd.  These are all anglers who you will see competing on the Bassmaster Elite Series, MLF Bass Pro Tour, and other major tournament trails this upcoming season.

As it pertains to the current roster of Bethel University anglers, it will be interesting to see how a new group of anglers step up to replace those anglers for the team this spring.  ACA events at Kentucky Lake and Pickwick present Bethel with a great chance to capitalize on double points opportunities at familiar Tennessee River fisheries.  Along with that, Bethel, who has always done well in the spring, will have multiple MLF events, as well as Bassmaster College Series major events over the next several months.  A strong showing in the spring could result in a points bump of more than 5,000 points and allow for them to continue their recent success as one of the top programs. 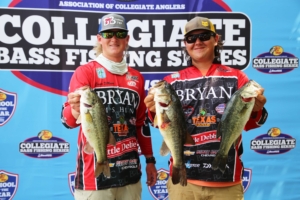 Bryan College makes the second team in this section of the standings that was both ranked in the pre-season Top 10 and has won the Bass Pro Shops School of the Year presented by Abu Garcia previously (2017).  Having earned a total of 3,175 points thus far, Bryan College checks in at 23rd in the latest standings update.

Bryan College, similar to 22nd ranked Bethel University, has a deep history of strong showings at Association of Collegiate Anglers ran events, which helped make their program a household name with all of the media coverage and top finishes.  The school won the 2020 BoatUS Collegiate Bass Fishing Championship presented by Bass Pro Shops at Pickwick Lake, and took home top honors as the number one ranked team in the 2017 Bass Pro Shops School of the Year presented by Abu Garcia.

Entering the 2021-22 season, Bryan College earned a pre-season ranking of 9th.  However, at that time, ACA staff and writers were unsure of exactly what caliber of team Bryan College had put together.  Several big names recently graduated, and a group of greenhorn underclassmen were left to carry on the winning tradition at Bryan College.

With the season now at the halfway mark, the jury remains undecided on just how good this Bryan College team can really be, but it does have its work cut out if the team is hoping to live up to its pre-season Top 10 ranking. 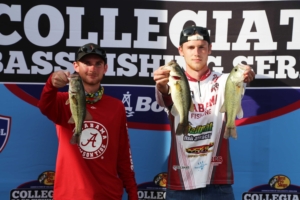 Next on the list, at 24th overall, is the University of Alabama.  Hailing from Tuscaloosa, AL, this team of seasoned anglers has earned a total of 3,160 points.  A bulk of the team’s points came at two major events this past fall.  The school earned 1,140 points at the Bassmaster College Series Championship, and 1,920 points at the AFTCO Collegiate Bass Open.

Double points earned at the first Association of Collegiate Anglers event of the 2021-22 season account for more than half of Alabama’s point total.  Henry McPherson & Matthew German (28th) and Paul Vercher & Hunter Luke (32nd) combined for two Top 35 finishes to gain a total of 1,920 points from the AFTCO Collegiate Bass Open at Lake Dardanelle.

The University of Alabama is the third team in a row to be ranked at this section in the standings that is also a former winner of the Bass Pro Shops School of the Year presented by Abu Garcia (2016).  Originally picked to finish 27th overall entering this season, Alabama is performing slightly above what their peers and members of the college fishing community expected.

The University of Alabama has a deep roster comprised of dozens of capable anglers.  Look for the team from Tuscaloosa to try to make a jump into the Top 10 before season’s end, and possibly even into the Top 5.

Rounding out the current Top 25 in the Bass Pro Shops School of the Year presented by Abu Garcia is Louisiana State University.  Located in Baton Rouge, LA, LSU has earned a total 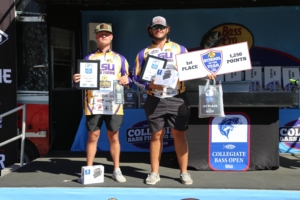 of 3,150 points on the season.  The team’s season points total is boosted by a victory at the 2021 AFTCO Collegiate Bass Open on Lake Dardanelle this past October.  Team members Heath Pinell and Taylor Knowles won the first ACA major event of the season with a two-day total of 24.89 pounds.  That 1st place victory netted a total of 1,250 points for LSU.

Heath & Taylor were featured on the Rapala #WeAreCollegiateBass Podcast following their victory at Lake Dardanelle.  Listen to that full interview here.

To this point in the mid-season rankings review, LSU has made the largest climb based upon the team’s position in the pre-season poll.  LSU was picked as the 83rd best team in the nation entering the 2021-22 season of the Bass Pro Shops School of the Year presented by Abu Garcia.

The team’s goal is to finish the year ranked in the Top 25.

The team’s dedication to show well in the School of the Year standings, combined with each team member’s knowledge and expertise on various types of fisheries should bode well for LSU to close out the year with a Top 25 ranking in the nation, and if they can capitalize on a few major events… even crack the Top 10.