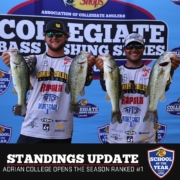 SAN ANTONIO, TX (August 26, 2021) – Many college students across the country are returning to class for the Fall semester.  Bass fishing clubs & teams are hosting their first meetings of the year, welcoming new members, and the first official ranking of the Bass Pro Shops School of the Year presented by Abu Garcia has just been released.  Anticipation and excitement abound as hundreds of the top collegiate anglers in the country embark on the quest to finish the season ranked number one in the nation.  The Association of Collegiate Anglers (ACA) is excited to announce the first rankings of the 2021-22 season, awarding valuable points and prestige in the only all-encompassing rankings system in the sport.  Adrian College stakes claim to the number one spot with 5,440 points, Auburn University starts its quest for the team’s first-ever title in second place, and McKendree University continues a dominant reign near the top as it opens the season ranked third. 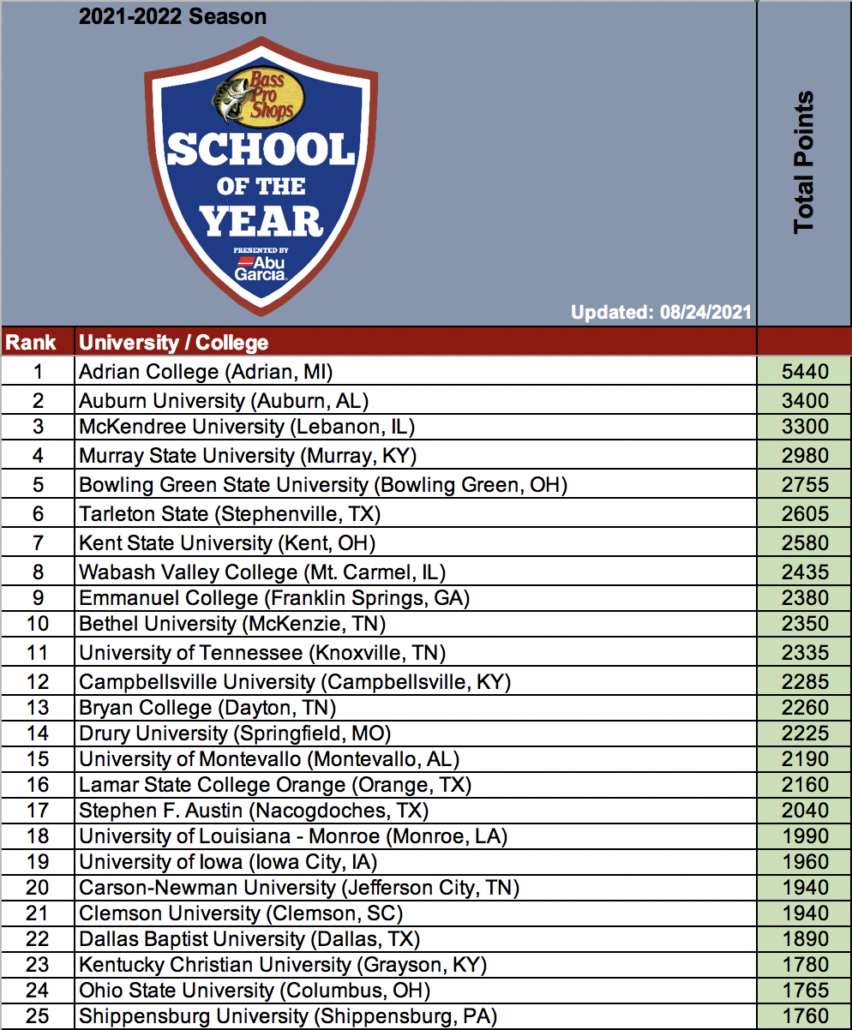 Adrian College has made the most of its early-season opportunities and jumped out to a commanding lead to begin the new year.  It’s been common over the past few years for Adrian to be in this position, as the number one ranked team in the nation early in the season, only to fade in the spring.   However, Adrian, who has become a powerhouse college fishing program thanks to three-straight third-place end of season rankings from 2019-2021, is hoping to change that this year and win its first-ever School of the Year title.

Currently, the Bulldogs Bass Fishing Team has a 2,040-point lead over second place.  Adrian’s point total is boosted by a victory from Griffin Fernandes and Hayden Scott at the BASS College Series National Championship that netted the team 1,500 points.  Then the following weekend after that win, Jacob Emery and Aaron Jagdfeld won an MLF Abu Garcia College Fishing event at the Detroit River.

Earlier this summer, the Association of Collegiate Anglers conducted a Top 25 Pre-Season Poll with input from top anglers, coaches, and industry members.  Adrian College was picked second overall out of the more than 250 college teams in the nation.  “It’s definitely an honor to be viewed as one of the top collegiate bass fishing teams in the country. We have worked incredibly hard to be recognized as one of the nation’s best programs,” said Seth Borton, Head Bass Fishing Coach at Adrian College.  “We plan to continue fishing as many events as possible and rotate through our team members with the most experience and best feel for each fishery.”  That formula is paying off so far, as Adrian College has placed a team in the Top 10 at every event in which they’ve earned points this season.

Several teams that have been at the top of the standings over the past few years, and were ranked in the pre-season Top 25, are absent from the Top 25 in the most recent update. Here is a look at several highly regarded preseason favorites who are ranked outside of the Top 25 at this time:

Also of note from the first official rankings is that 17 of the Top 25 Pre-Season picks are in the Top 25 at the moment.  Bowling Green State University and Kent State University are two of the biggest surprises in this update.  The two Ohio-based teams finished the 2021 season ranked 103rd and 62nd respectively, and both are currently ranked in the Top 10.

Auburn University, which has made it a priority to win this year’s Bass Pro Shops School of Year title, looks to build upon its late flurry at the end of the 2020-21 race in hopes of claiming the team’s first-ever title this go-around.  Earning a total of 3,400 points thus far, Auburn is ranked second in the national rankings.  Auburn was a popular pick in the pre-season rankings as they were picked fifth overall, while also receiving two first-place votes.  A strong start to the 2021-22 campaign places Auburn in the national title conversation, and the team will definitely be one to keep an eye on throughout the year.

Rounding out the top three is perennial college fishing powerhouse McKendree University.  The two-time School of the Year winner currently has 3,300 points.  McKendree finished the 2020-21 season ranked second behind the University of Montevallo.  Picked fourth overall in the pre-season rankings, McKendree University will be on a mission to prove that they are once again the top team in the country.