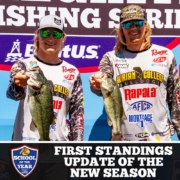 SAN ANTONIO, TX (August 24, 2022) – For many college students across the country, it’s time to return back to campus and begin a new school year.  With the start of another school year comes the first update of the season in the race for 2022-23 Bass Pro Shops School of the Year presented by Abu Garcia.

Adrian College has once again taken the top spot in the first National Rankings of the season with 6,620 points.  Adrian is always near the top of the standings in the top schools in the nation.   Sitting in 2nd is back-to-back defending School of the Year winner University of Montevallo and right behind them is another two-time School of the Year title holder McKendree University.

The first update of the season in the chase for Bass Pro Shops School of the Year presented by Abu Garcia features point allotments from nine total events that have allowed several schools to earn rankings in the Top 25 in the nation.  This update includes four major double points events, and five school-run/other events.

Here is a look at the Top 25 teams in the nation: 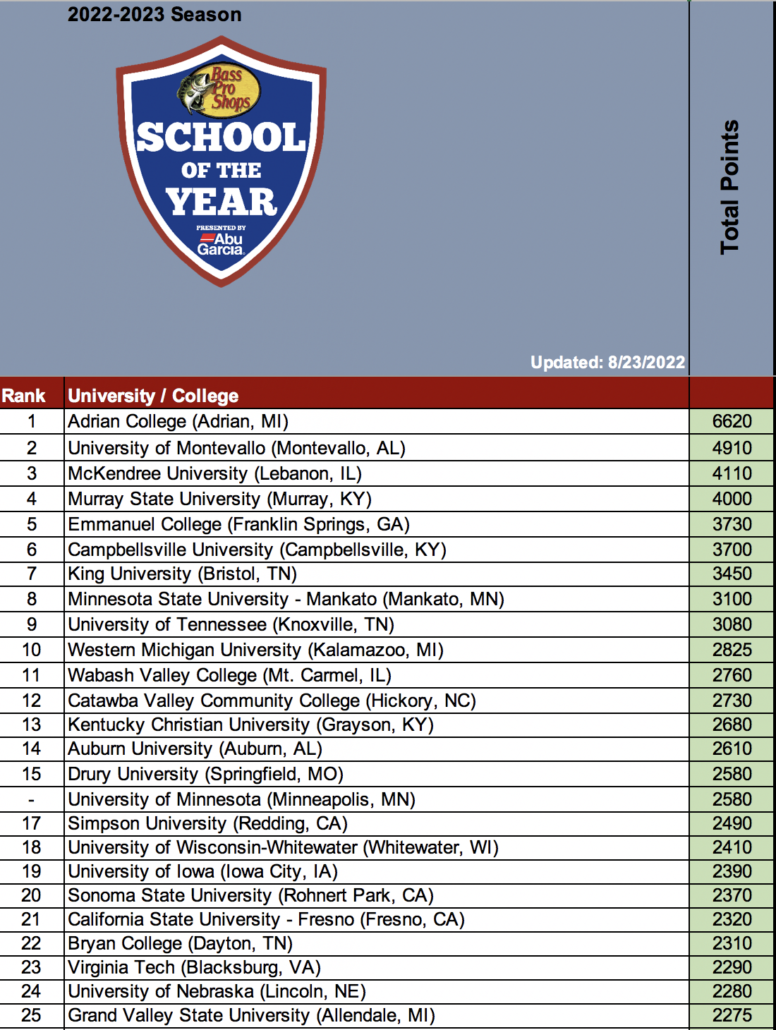 Adrian College started the season off strong by placing teams in the Top 5 of the overall standings at the MLF Northern Regional on Smith Mountain Lake back in June.  Matthew Davis & Sam Shoemaker finished in 2nd and Russel Buffa & Matt Mosby claimed 5th.  Those two Top 5 finishes earned Adrian College a total of 2,450 points at that particular event.  The team from Michigan then proceeded to earn over 2,000 points at the Bassmaster College Series event on Saginaw Bay, and then also cashed in on a double points opportunity during the MLF Central at Mississippi River to the tune of 1,880 points.  Quality performances at double points major tournaments combined with two school-run/other events have Adrian College ranked number one in the nation with a more than 1,700-point lead over second.

Trailing close behind top-ranked Adrian College are two storied programs that have accounted for each of the last four School of the Year titles.  The University of Montevallo (2021, 2022) and McKendree University (2019, 2020) are ranked 2nd and 3rd respectively.  Having competed in one less major event than Adrian College, it is safe to say that, with a good showing at another major event this season, the 2nd & 3rd ranked teams are in a dead heat with Adrian College for that number one position.

For the second straight year, the Association of Collegiate Anglers conducted a pre-season poll to rank the top teams in the country entering a new season.  Following the first points update of the 2022-23 cycle, 13 of the teams in the current Top 25 were selected in the Top 25 of the ACA Pre-Season Poll.  Here is a look at several of those teams exceeding expectations placed upon them by fellow anglers, coaches, and media members:

There are a total of 12 teams inside of the Top 25 that were not ranked there in the ACA Pre-Season Poll.  The highest ranked of those teams is King University.  After being unranked to enter the new season, King University is currently in 7th with 3,450 points.

View a complete list of sanctioned events that will be eligible for points to count towards the Bass Pro Shops School of the Year presented by Abu Garcia here.

The next points update will be released during tournament week, leading up to the start of the Bass Pro Shops Big Bass Bash presented by Berkley at Kentucky Lake next month.