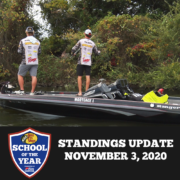 Montevallo Climbs into 2nd, and Former Number One Murray State Drops to 3rd   in the Bass Pro Shops School of the Year presented by Abu Garcia

SAN ANTONIO, TX (November 4, 2020) –   The standings in the Bass Pro Shops School of the Year presented by Abu Garcia experienced a massive shake-up as the race to be, and maintain, number one grabs the spotlight.  For the first time in nearly two months, Adrian College regains the number one overall ranking in the nation.  Former number one Murray State falls to third, allowing Montevallo to move up into second as the calendar flips over to November.

Year in and year out, the fall portion of the schedule, as it pertains to the Bass Pro Shops School of the Year presented by Abu Garcia, is typically dominated by Adrian College.  However, in 2020 this has not played out similar to years past.  Adrian College got out to the early lead, and maintained it through much of August, but was overtaken by Murray State entering the first ACA ran event of the year back in September, the Bass Pro Shops Big Bass Bash presented by Berkley.  Though Adrian College did not make many headlines over the course of the past six weeks, they continued to turn in quality finishes and methodically moved into position to reclaim first place as winter quickly approaches when there are less events to fish on a national basis. 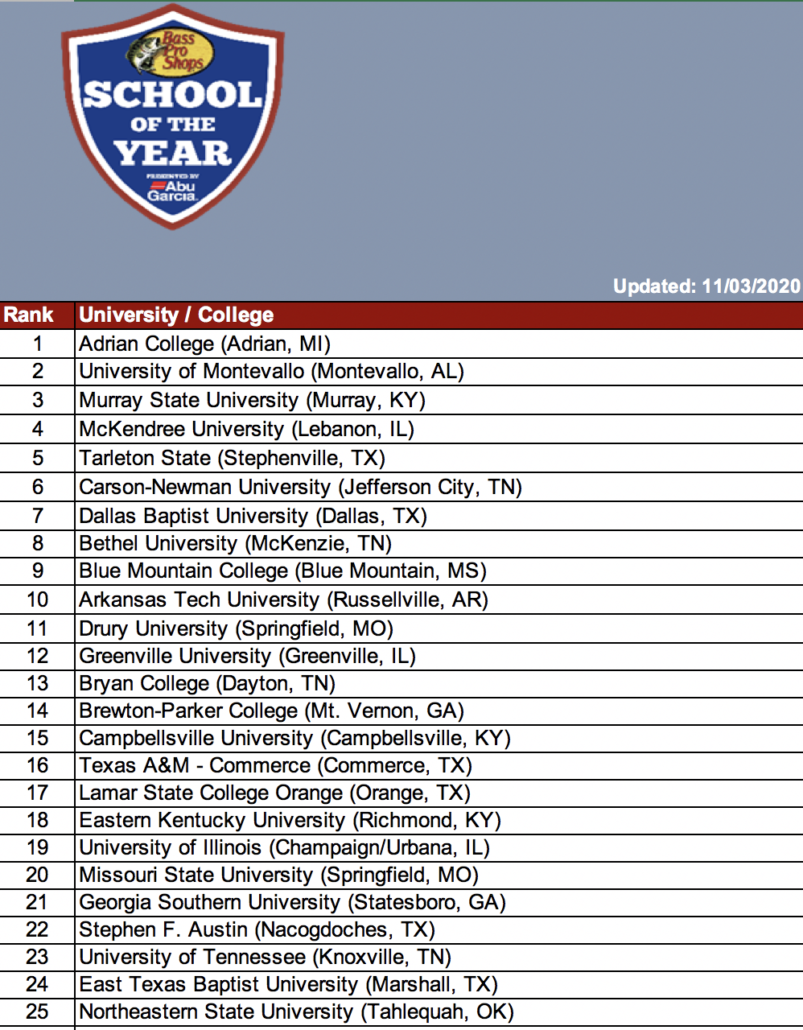 Some of the more intriguing movement amongst the Top 25 occurred right near the top of the standings.  Three teams amongst the Top 5 saw movement from the previous update to now, defending School of the Year champs McKendree narrowed their gap between the fellow competitors, and Tarleton State remained stagnant.

The most significant move happened at the top with Adrian College, but it is important to highlight the success of both Montevallo and McKendree.  After sitting in the 3rd spot for quite some time now, the University of Montevallo propelled themselves into 2nd by earning 940 points at the Bassmaster College Series Championship last week.  That 900 plus point performance boosts their season total to 7,680 points, more than 250 clear of 3rd.

Also making a significant move is the two-time defending School of the Year winner McKendree University.  Though they did remain in 4th place through the last few updates, it is important to note their points total for the season.  Following the previous update, they had 6,400 points.  That had them just 70 points clear of 5th, and 570 points behind first place.  Now, McKendree is up to 7,370 points.  The Bearcats are more than 1,000 points ahead of 5th, and only 410 points out of 1st.

Here is a look at other teams to make significant moves within the Top 25 for the Bass Pro Shops School of the Year presented by Abu Garcia:

Only a few more events remain before the fall portion of the 2020-2021 season is in the books.  The Association of Collegiate Anglers will provide another update to the standings in the coming weeks as the final events of this semester are contested and then it will be time to plan for the 2021 spring events and what’s likely to be a lot of changes in the standings.