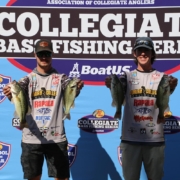 SAN ANTONIO, TX (October 14, 2022) – The Association of Collegiate Anglers contested its second major event of the 2022-23 season on Lake Dardanelle in Russellville, AR.   The AFTCO Collegiate Bass Open is one of several double points events on the ACA schedule and it awarded 1,750 points to first place, with point increments decreasing by 10 down to 150th being the last place to earn points.

At this event, school bass fishing clubs and teams were eligible to earn points for their two highest-finishing teams inside of the Top 150.  Adrian College earned 2,580 points to maintain its hold of the number one spot in the rankings based on finishes of 33rd and 61st by the pairings of Owen Januszewski & Hayden Scott, and Caleb Dachenhaus & Aaron Jagdfeld.  Second ranked University of Montevallo and third ranked McKendree University each earned over 3,000 points to stay in their respective places.

Lane Stephens and Colsyn Head were the highest-finishing pairing for third ranked McKendree University.  The duo finished in fifth with 21.35 pounds.   Also placing in the Top 20 for McKendree were Jack Stephens and Nick Holtgrave.  Their 17th place showing combined with the Top 5 from Stephens and Head helped McKendree to earn 3,300 points last weekend.

18 of the Top 20 teams in the nation competed in the AFTCO Collegiate Bass Open at Lake Dardanelle.  45 colleges and universities tallied points at the ACA double points event, with nine different schools earning over 3,000 total points.   Here is a look at some of the biggest movers in the 2022-23 Bass Pro Shops School of the Year presented by Abu Garcia following the AFTCO Collegiate Bass Open:

Two teams also moved into the Top 25 following the latest points update.  Blue Mountain College jumped from 30th up to 19th.  Tarleton State University made one of the biggest jumps in the standings, rising 19 spots from 42nd to 23rd.

Greenville University and Simpson University both dropped out of the Top 25 in these updated standings.

Overall second ranked University of Montevallo, who has won the past two Bass Pro Shops School of Year presented by Abu Garcia titles, was the highest points earning school of those that competed at Lake Dardanelle.  The two Top 10 finishes mentioned earlier helped Montevallo to narrow the gap between themselves and top-ranked Adrian College by 740 points.