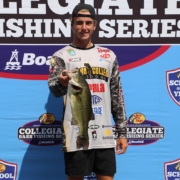 SAN ANTONIO, TX (September 27, 2022) – The Association of Collegiate Anglers recently contested its first double points event of the 2022-23 season.  Close to 500 elite college anglers competed for two days on Kentucky Lake, vying for valuable points in the race for the prestigious Bass Pro Shops School of the Year presented by Abu Garcia.  1,750 points were awarded to first place, with point increments decreasing by 10 all the way down to 150th.  Numerous of the nation’s top teams were on hand in Paris, TN at Kentucky Lake in hopes of earning notoriety as a Top 25 ranked team.  Top-ranked Adrian College maintained its first-place ranking, second ranked University of Montevallo closed the gap every so slightly, and McKendree University held on to the third spot. 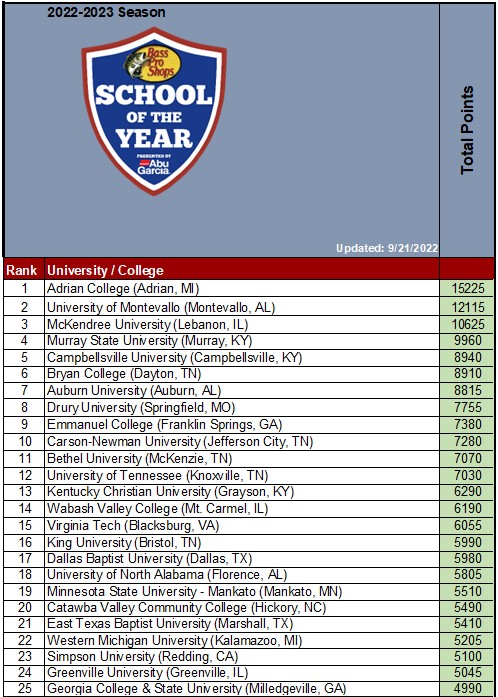 ACA double points events have a major impact on the race for Bass Pro Shops School of the Year presented by Abu Garcia.  With 1,750 points up for grabs for first place and the chance to capitalize on a second high finish, schools can earn well over 3,000 points after two days of tournament competition.  A total of nine teams earned over 3,000 points at the first ACA double points event of the season.  Schools like McKendree and Bethel University each placed two anglers in the Top 5 of the overall tournament standings.  Second ranked Montevallo also had two fish in the Top 10.  Here is a look at some of the highest earning teams at the Bass Pro Shops Big Bass Bash presented by Berkley.

The next major ACA double points event on the schedule will take place at Lake Dardanelle with the AFTCO Collegiate Bass Open on October 8-9, 2022.  Check out the full list of upcoming School of the Year points eligible events here.