University of Akron climbs 22 spots to secure 2nd, and Nebraska jumps from 16th to 3rd overall

SAN ANTONIO, TX (9/6/2020) – The latest update to the standings in the Bass Pro Shops School of the Year presented by Abu Garcia features a record-breaking shift in the rankings, including a new overall number one ranked school.  There is a different team occupying each spot in the Top 25, and twice as many teams earned points compared to the first update to now.  The team that stands at the front of the pack following the latest calculations is Adrian College.  Increasing their season total by 705 points, Adrian leads second ranked Akron by 215 points, and the number 3 team from Nebraska by 245 points. 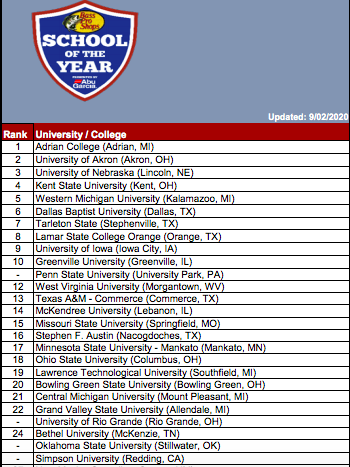 A lot of shifting and movement occurred in this most recent standings update, beginning with twice as many schools now being included in the rankings.  After adding the results from four new tournaments since the previous update, 13 new teams moved into the Top 25, three of which were previously all unranked.  Greenville University, Bethel University, and Simpson University all went from being unranked to sitting inside of the Top 25 at the moment.  Greenville University made the biggest jump of the three as they earned 1,225 points from a total of two events to slip inside of the Top 10.  One other big mover of note is Western Michigan University.  The team from Kalamazoo moved from 54th all the way up to fifth in the rankings by earning more than 1,100 points in the past two weeks.

This week’s updated standings also feature a new number one team at the top.  Adrian College earned 705 points at the Bassmaster College Series event on Lake Hartwell to increase their season total to 1,635 points.  Adrian College has quickly grown accustomed to holding the overall number one ranking during this portion of the season.  For each of the last three years, the team from Adrian, Michigan has capitalized on their early season points earning opportunities.  It has become common place to see them hold tight to that top spot all the way into the new year, prior to the spring tournament season cranking up.  With a busy schedule set for the fall, Adrian College has their work cut out for them if they want to continue their reign of the top spot.

A long list of events are scheduled to be contested over the course of the next three months.  The 2020 fall season will mark the busiest fall stretch in the history of the Bass Pro Shops School of the Year presented by Abu Garcia.  Here is a look at upcoming School of the Year qualifying events:

To view the entire schedule for School of the Year points earning events, follow this link.

The first double points event of the season will be the Bass Pro Shops Big Bass Bash presented by Berkley on Kentucky Lake in Paris, TN.  Schools will be eligible to earn points for their two highest finishing anglers inside of the Top 100.  Double points events provide schools a unique opportunity to earn a substantial amount of points that can catapult them up the standings.  Registration for this event is open until September 11th.  Follow the link to reserve your spot in the first major ACA event of the year!