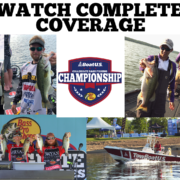 The 2020 Championship on Pickwick Lake in Florence, AL will consist of two and a half hours of comprehensive national TV coverage.

SAN ANTONIO, TX (December 7, 2020) – The longest-running National Championship event in the sport of collegiate bass fishing will once again receive unprecedented media coverage. Contested on Pickwick Lake in Florence, AL, the 2020 BoatUS Collegiate Bass Fishing Championship presented by Bass Pro Shops will consist of five separate half-hour episodes.  This will amount to two and a half hours of cumulative television coverage, making the 2020 Championship episodes the most comprehensive, in-depth coverage of college fishing’s premier Championship event in the history of its existence.

The BoatUS Collegiate Bass Fishing Championship presented by Bass Pro Shops was the first major National Championship event in the history of collegiate bass fishing.  Director of the Association of Collegiate Anglers, Wade Middleton, along with help from the top names & such as BoatUS, Ranger Boats, Garmin, Yamaha Outboards, and others, worked diligently to put together the inaugural Championship back in 2005.  The event was contested on Lake Lewisville in north-central Texas and drew a roughly 45 boat field comprised of teams from all across the country.

Fast forward to the present time, and the BoatUS Collegiate Bass Fishing Championship presented by Bass Pro Shops has grown considerably.  “Little did anyone know what college fishing would mean to the growth of bass fishing, not only on campuses nationwide but all the way down to the high school level.  It’s just been an awesome ride to see and watch where many of those young men and women from the first years are now in the fishing industry,” said  Wade Middleton, President of Careco and Director of Association of Collegiate Anglers.

Along with being the longest-running National Championship, this premier tournament also boasts the most comprehensive media coverage of any college fishing event in the country.  The weeklong event is covered by professional production staff from CarecoTV, which provides in-depth, unprecedented television coverage.  That coverage includes on-the-water action, behind the scenes angler interviews, Yamaha Angler Appreciation Night, and a comprehensive breakdown of the Bass Pro Shops School of the Year presented by Abu Garcia.

The 2020 Championship will boast thousands of hours of national television airtime on 7 separate networks that will be broadcast into the living rooms of millions of viewers across the United States and Canada.  Along with that, all episodes will be available 24/7 for free viewing on the Outdoor Action TV app and website.