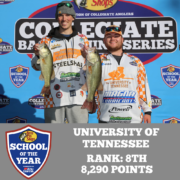 SAN ANTONIO, TX (5/13/2020) – In collegiate bass fishing, the measuring stick for teams to know where they stand against the best teams in the nation is the Bass Pro Shops School of the Year presented by Abu Garcia.  Since the 2011-2012 season, the School of the Year race conducted by the Association of Collegiate Anglers has awarded points to schools that compete in numerous qualifying events spread across various tournament circuits.  This allows for the most comprehensive ranking system in the sport.

Since the beginning of this program, there have been several teams remain fixtures in the Top 25 year after year.  One of those schools is the University of Tennessee located in Knoxville.  In the past eight seasons, the UT FishingTeam has never finished outside of the Top 25.  Tennessee appears poised to continue this tradition in the 2019-2020 season as they currently sit in 8th place with just one event remaining.

“Being ranked in the Top 25 means a lot to us because of all our hard work, dedication, and perseverance during this season,” said team member Robert Gee.  “Unlike most fishing teams from other colleges and universities in the Top 25, our team members have no incentives such as scholarships or coaching.  So our passion and dedication for fishing is what drives us and why being ranked in the Top 10 means so much to us.”

It is that passion and dedication to the sport that has earned the team 8,290 points this season.  One of their best finishes of the year came at the 2020 Texas Lunker Challenge presented by Mossy Oak Fishing on Sam Rayburn Reservoir.  Luke Byerly earned a second-place finish at that event and took home an additional $500 for earning the Garmin Tournament Rewards contingency.

The University of Tennessee Fishing Team also makes the annual trip to Pickwick Lake for the BoatUS Collegiate Bass Fishing Championship in Florence, AL.  “We are looking forward to seeing everyone at Pickwick and competing at a high level again,” noted Chase Dawson.  Dawson has fished the year-end Championship numerous times.  The experience and wisdom that comes with that veteran status will make Tennessee a school to keep an eye on during the tournament.

Lastly, School of the Year points will be the team’s other main goal during Championship week.  “I am most looking forward to getting to compete against the best competition in college fishing at Pickwick Lake on the TN River to enhance our ranking in the School of the Year,” Gee added.  UT’s highest-ever year-end rank was 3rd place in 2017.  It will be exciting to see if the team from Knoxville can best that mark when the 2019-2020 season draws to an end in just a few short weeks.