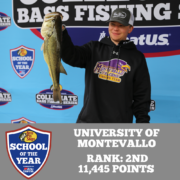 SAN ANTONIO, TX (5/21/2020) – The next team up on our feature series is one of the longest-running programs to be competing in Association of Collegiate Anglers events.  The University of Montevallo broke out onto the scene in the mid-2000s and has now cemented their place amongst college fishing’s best teams year in and year out.  For the 2019-2020 season, Montevallo has earned a total of 11,445 points and currently sits in 2nd place for the Bass Pro Shops School of the Year presented by Abu Garcia.

One fun fact that readers will be interested to know is that the Montevallo fishing team was first started by current Bassmaster Elite Series pro Clent Davis.  Davis, who broke out onto the professional circuit as a boater in 2012, got his start at the University of Montevallo.  In a past interview we did with him back in 2016, Davis credits college fishing for a large part of his success as a pro.

“It’s as simple as this: College fishing helped me in two ways. First, I traveled all over the country fishing lakes that I knew nothing about, which developed my arsenal of techniques,” Davis explained.  “Secondly, it really helped me on the business side of fishing as far as sponsors go, such as what you need to do for them to not just have them have as sponsors, but to keep them long-term.”  To this day, Davis still keeps in touch with current Montevallo team members and gives back to the program in a variety of ways.

A journey that’s been 15 plus years in the making, Montevallo is knocking on the doorstep of being crowned the best bass fishing team in the nation.  The Falcons are just over 1,000 points behind 1st place McKendree University entering the final event of the season.  “To be in the position we are now, being second in SOY with the Championship coming up in June, is something that every fisherman on our team has had on their minds to achieve all year long,” said Montevallo angler Mason Waddell.  “We are one good finish out of clinching the title, and this is something that would mean more than anything to our team.”

Montevallo has remained very consistent throughout the season and even gained momentum as the season progressed.  At each of the three major ACA events, Montevallo improved from each tournament to the next:

With just one tournament left, Montevallo knows what it will take to seal the deal at Pickwick Lake.  “We are one good finish out of clinching the title, and this is something that would mean more than anything to our team,” Waddell explained.  “All we need to do is bring the same work ethic we have brought all year long to this tournament and no matter how it shakes out, we are all proud to be part of a team that has achieved everything that we have together.”

Sitting just 1,000 points out of 1st place, there are a variety of ways in which Montevallo could climb their way to that number one spot.  Will they be able to do it when the scales close on Day 2 at the Championship?  We will have to stay tuned to find out in just three short weeks!

EP. 75 – McKendree Looks to Repeat as School of the Year Winners
Scroll to top